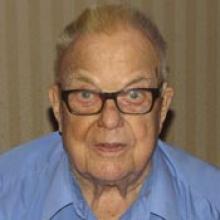 PETER R. MUDERY Peter R. Mudery of Winnipeg, MB passed away peacefully on October 1, 2012 at the Seven Oaks Hospital, at the age of 91 years. He was born July 4, 1921 in the Lynnville District north of Winnipegosis, MB to Steve and Mary Mudery (nee Wilchinski). He received his primary education at Lynnville School, then continued at the Fork River High School. During his years of teaching, he took courses at the University of Manitoba and received his Bachelor of Education degree. He loved to teach both inside and outside the classroom. This passion took him to Germany for three years, as he would teach during the day and explore Europe and the Orient on the weekends and holidays. After 44 years of teaching, he retired in 1985 from St. John's High School and enjoyed many bus tours in Canada and the US. He was known for his quick wit, sense of humour and selfless spirit. Peter was predeceased by his parents, Steve and Mary, brothers: John, Nick, Bill, Henry, and Alex, and sister Annie Borowski. Survived by one sister-in-law, Vera Maniel of Winnipegosis. He leaves to mourn and cherish fond memories several loving nephews, nieces, great-nephews, great-nieces, and students of his life. A funeral mass will be held at the Winnipegosis Ukrainian Catholic Church on Saturday, October 6 at 10:00 a.m. In lieu of flowers, donations can be made to the charity of your choice. Sneath-Strilchuk Funeral Services 1-877-243-4459 www.sneathstrilchuk.com