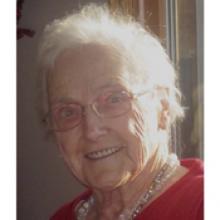 PAULINE KABAN Pauline Kaban of Winnipeg, formerly of Russell, passed away on Thursday, October 4, 2012 at the age of 90 years. Pauline is survived by her daughter Lesia (Dennis) Wilson of Winnipeg, sons: Eugene Kaban of Winnipeg, Dr. Allan (Doreen) Kaban of Nanaimo, BC, six grandchildren and eight great-grandchildren. Pauline is also survived by brothers: Bill (Joan) Naherniak of Duncan, BC Melvin (Elsie) Naherniak of Rossburn, MB, sisters: Lena Kalynuk of Russell, MB, Dorothy Popyk of Stony Creek, ON, Anne Sackney, of Burns Lake, BC., and sister-in-law Anne Naherniak of Russell, MB. The funeral service will be held on Wednesday, October 10, 2012 at 10:00 a.m. from St. Mary's Ukrainian Catholic Church, Russell with interment following in the Russell Memorial Gardens. Fr. Mykhaylo Khomitskyy officiating. If friends so desire, donations may be made to St. Mary's Ukrainian Catholic Church, Russell or Ruthenia Cemetery Fund, c/o PO Box 271, Rossburn, MB ROJ 1VO. Remembrances and condolences may be emailed to bbfs@mymts.net Braendle-Bruce Funeral Service of Russell are in care of arrangements. (204) 773-2747