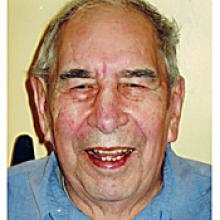 WILFRED MONKMAN On Thursday, October 4, 2012, Wilfred Monkman passed away at Birch Lodge Personal Care Home, Hamiota, MB, at the age of 87. Left to cherish his memory is his wife Bev (Carnegie) of Kenton, MB, numerous nieces and nephews, and long time friends Ron Monkman and Andrew Hourie. He was predeceased by his siblings Kenneth, Gordon (Red), Lawrence (Tache), Irene, Dorothy; and his parents Campbell and Agnes. Wilfred was born in Scanturbury, MB, on May 28, 1925, at the family farm. For many years he drove trucks up north. His last years were spent working and maintaining the Crandall Cemetery. A graveside service will be held Saturday, October 13, 2012, at 2:00 p.m. at the Crandall Cemetery, Crandall, MB. Messages of condolence and/or photos can be shared via the obituary at www.campbellfuneralhome.ca Campbell Funeral Home, Hamiota are entrusted with the arrangements. (866) 620-2744