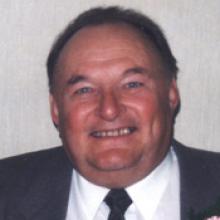 MICHAEL YARMIE November 10, 1931 - October 16, 2012 With broken hearts we announce the passing of our most cherished brother, cousin, uncle and friend. Left to cherish Michael's memory is his sister Marcie, his nieces, nephews and cousins. Michael was predeceased by his loving wife, Jean in 2005, as well as his father and mother Alex and Annie Yarmie, father and mother-in-law John and Teenie Makoweski, his brother Peter, his brother-in-law Gabe and his uncle Paul. Michael taught school in Tolstoi, Rosser and at Earl Grey in Winnipeg. After his retirement he and Jean travelled to many places in the United States. In the last few years, he frequented the casinos in Vegas and Mahnomen, MN. Michael enjoyed life to the fullest. He gave of himself freely, had a heart of gold and a soul of tenderness. Seldom would you hear an unkind word from Michael. Our love for Michael has no distance, it's always in our hearts. A Funeral Service will be held on Monday, October 22, 2012, at 10:00 a.m. at All Saints Ukrainian Orthodox Church, 1500 Day Street, Transcona with Father Bill Wasyliw officiating. Interment will follow in Glen Eden Memorial Gardens. Flowers gratefully declined. Donations may be made in Michael's memory to the Heart and Stroke Foundation of Manitoba or to a charity of your choice. 204-586-8044