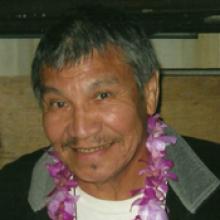 FRANK EWART SETTEE (MANITOU MAHKWA) December 18, 1942 - August 7, 2012 It is with great sadness that we announce the passing of our brother, on August 7, 2012 in Chilliwack, BC. Frank was greatly respected as a Traditional Elder and Spiritual Teacher throughout Turtle Island. He suffered with Diabetes in the last several years of his life which limited his mobility and travel, yet many continued to come to him to receive teachings. Frank embraced all people and every culture, and respected all spiritual beliefs. In his last days, the love that Frank felt for the people and the love that others felt for Frank was evident by the many who arrived at his bedside from the four directions to give thanks for his life, and to support him on his journey home. Frank left this physical world giving praise to Creator for his many Blessings. Traditional Ceremonies were held in BC, Manitoba, Montana and South Dakota, while vigils were held in his honour in various locations across Mother Earth. A small family candlelight service took place in Winnipeg at Young St. United Church on September 16. Frank is sadly missed by his son Sandy, daughters Jackie and Sherry, grandchildren and great-grandchildren, sisters Katherine Hall and Billie Schibler (Winnipeg), Renae Morrisseau and Martha Hanson (BC), Tana Blackmore (Montana), Robin Youngblood (Washington), and brother Woody Vaspra and partner Catie Johnson (Colorado), family from Pinridge South Dakota - Marie and Luke Foxbelly, longtime friends and helpers, Graham and Howie, and many nieces, nephews and friends. Frank's beautiful Spirit continues to touch many. In Frank's words, The journey has been long, it has been tiring...Now I rest healed from pain, healed from sorrow, bathed in warmth, bathed in happiness, in the shelter of His True Love.