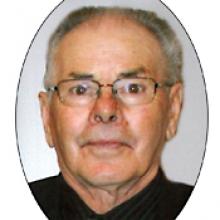 STANLEY BRYKALIUK Stanley Brykaliuk of Rossburn, MB, passed away on November 16, 2012, at the age of 80 years old with his children at his side at Russell Health Center losing his battle to cancer. Stanley was born on June 15, 1932, to William and Dora Brykaliuk. Surviving Dad is his loving wife Lena of 59 years, children Brenda (Michael) Sawchuk, grandchildren Steven and Rachelle Sawchuk, Jackie and Jamie Tesarski, and Travis Sawchuk; Patricia (Elmer) Sawchuk, grandson Nicholas Sawchuk, and son Milton and grandson Ryan Brykaliuk; granddaughter Melanie Kalyniuk (Adam); great-granddaughter Avery of Winnipeg; grandson Jason Kalyniuk (Allison) and Shawna all of Rossburn. His sisters Mary Kuzyk of Grandview and family and Nellie Olynyk of Dauphin and family. Sister-in-law Evelyn Brykaliuk of Cranbrook and family. Rose Brykaliuk of Winnipeg and family. Verna Brykaliuk of Minnedosa and family. Stanley was predeceased by his parents William and Dora Brykaliuk, step-brothers John and Bill Obedniak, brothers Mike, Nicholas, and Edward, daughter Cindy Richardson, daughter-in-law Sonia Brykaliuk, father and mother-in-law Fred and Helen Pushka, brothers-in-law John Olynyk, Peter Kuzyk, sister-in-law Mary Obedniak, and numerous aunts, nieces, nephews, neighbors and friends. Funeral Service will be held on Wednesday, November 21, 2012, at 10:00 a.m. Prayers will be said on Tuesday evening at 7:30 p.m. Both services will be held at Sacred Heart of Jesus Ukrainian Catholic Church, Rossburn, MB. If friends so desire donations can be made to the Sacred Heart of Jesus Ukrainian Catholic Church - Elevator Trust Fund. Braendle-Bruce Funeral Service of Russell in care of the arrangements.