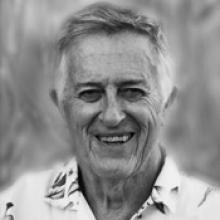 JOHN MARTIN STEWART August 15, 1936 - December 1, 2012 This past summer, John and Shirley took their four children, spouses and grandchildren to the Turks and Caicos to celebrate their 50th wedding anniversary. This was a special wish of John's that Katherine, Barbara and husband Glen, Ian and wife Liane, Susan and husband Ian, and their six grandchildren, Gryphon, Drayke, Gregory, Leo, Kira and Ariana could celebrate this special time together. John leaves his loving wife, children and grandchildren to remember and celebrate the wonderful times they had together. He is also survived by his widowed sister Margaret, brother Robert and his wife Eve, and brother George and his wife Susan. Born in Scotland, John spent his teen years in Jamaica and then came to Canada with his family. He went to McMaster University and obtained his BSc., MSc. and PhD. After being granted a NATO fellowship, he did a two year post-doctorate at the Macaulay Institute in Aberdeen studying the peat bogs of Scotland. When he returned to Canada, he taught at McMaster University in the Biology department. He came to the University of Manitoba in 1969 and taught in the Botany department where he continued his research in peat bogs and wild rice, and later became the head of the department. He was proud of his students and their successes. John enjoyed playing bridge with a couples bridge group for many years and with the duplicate bridge group. He liked to play golf and curl. He was a people person who enjoyed meeting people and finding out about their lives and interests, so the many cruises around the world were a source of enjoyment to him. As long as we remember and think of him, he will always be with us. Cremation has taken place. There will be no formal service but his family invites his friends to join with them in celebration and remembrance of his life at Southwood Golf and Country Club on Wednesday, December 5 at 2:00 p.m. In lieu of flowers, please feel free to send a contribution to the Winnipeg Humane Society or the charity of your choice.