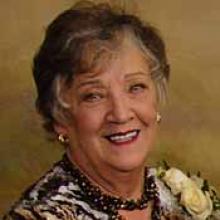 FLORENCE (FLO) MORRISH Flo was born in Sifton, Manitoba, Monday, March 24, 1941. She spent her early childhood years in many small northern communities as her father worked for CN rail lines. She had many fond memories of these early years on the Bay Line . Families nurtured lifelong friendships. Flo's family settled in The Pas when she was a teenager. She graduated from The Pas Collegiate Institute and attended the Little's Business College in Dauphin following graduation. Flo and Gary were high school sweethearts, who recently celebrated their 50th wedding anniversary. They were united in marriage August 4, 1962 and by 1969 their family was complete with six children. Flo established a busy career as a stay at home Mom being there at all times for her family and often putting their needs before herself. Their family continued to grow with weddings, 11 grandchildren and one great-granddaughter. Flo's children and grandchildren were a great source of pride and joy. She played an active role in their lives and they adored her for it. Flo's family, her friends and her faith were always first and foremost in her life. She had a broad variety of interests, ranging from reading, gardening, politics and current affairs. In her younger years, Flo was an avid curler and kept her love of the sport by watching every game on TV. Her competitive nature was especially expressed while playing scrabble and cards with her friends. Flo was always community minded, volunteering whenever needed at her children's schools and sporting events. She was an active member for The Pas Recreation Commission, the Winter Games, The Pas Centennial, just to name a few. Most important was volunteering for CancerCare and helping others who were battling cancer. Her own determination to beat cancer was her inspiration to help others. Flo had a unique and incredible sense of style, reflected in her home, her flower gardens and her choice of colour. Any colour was okay as long as it was red! Flo welcomed everyone into her home where she would host and cook for many. No meal was prepared for less than 12 and her weekly Sunday suppers were enjoyed by her family. Her butter tarts and cabbage rolls are legendary. Flo and Gary travelled extensively over the years with family and friends. They have many fond memories from their trips to Mexico, Hawaii, New Zealand, Europe and travelling across Canada from coast to coast with their children. Flo was a special lady, one of a kind, loving, forgiving, generous, classy, genuine and sincere. These qualities will be remembered and missed by all who knew her. Flo passed away peacefully Sunday, December 2, 2012 with family at her side. Flo is survived by her loving husband of 50 years, Gary; six children, 11 grandchildren and one great-granddaughter. Sons: Brian (Karen); Bruce (Barb) and their children Matthew, Patrick (Gaylynn) and Sophia; Brent (Shannon) and their children Andrew, Eric and Leah. Daughters: Cheryl (Kevin Scott) and their children Blair and Erika; Lori (Rob Veito) and their children Ashley and Jordy; Dori (Shawn Hnidy) and their children Lindsay and Colby. Sisters Gloria (Hubert) Plante, Donna (Jack) Madrigga; brothers-in-law Jack Kennedy, Don Morrish; sister-in-law Janice Morrish and their families. Flo was predeceased by her parents Steve and Helen (nee Krawec) Shemanski; sister Caroline Kennedy; in-laws Clarence and Evelyn Morrish. In keeping with family wishes cremation took place and a service of remembrance to celebrate Flo's life was held Monday, December 10, 2012, 11:00 a.m., at Our Lady of the Sacred Heart Cathedral, The Pas, Manitoba with Rev. Jack Herklotz and Rev. Bill Stang presiding. Music ministry was provided by Jana Dutkiewicz and Tanis Asselstine. Scripture readings were proclaimed by Maureen Kennedy and Andrew Morrish. Memories of the heart were shared by Cheryl Scott and Brent Morrish. Ushers were John Pierson, Ernie Neveaux, Vic Kitzul, Richard King and Grant King. In lieu of flowers, donations can be made in Flo's name to The Pas Health Complex Foundation, Inc., Memorial Fund, Chemotherapy Department at The Pas Site, Box 541, The Pas, Manitoba, R9A 1K4. Hemauer Funeral Home and Cremation Services, The Pas, are in care of arrangements. For online condolences visit www.hemauerfuneralhome.com