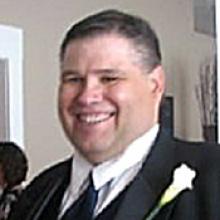 STEPHEN (BRENT) SHULE Stephen Brent Shule, 44 years of age, of St. Vital, MB, passed away on December 29, 2012 as a result of health complications. Brent was born May 24, 1968 to Frank and Pat Shule (nee Walterson) in Killarney, Manitoba, the eldest of their four children. He was predeceased by his mother Patricia in 2010 and is survived by his father Frank Shule of Killarney; his brother Jamey, Jamey's wife Sheryl and their children, Taylor and Brennan of Killarney; his brother Todd, Todd's wife Shannon and their children, Graeden and Griffin of Vermilion, Alberta; his sister Stacey and her partner Quentin of Winnipeg. Brent loved his family dearly and was especially proud to be an uncle to his four nieces and nephews. He is also survived by a large, extended family who, along with his immediate family, mourn the loss of a beloved and kind family member. Brent was raised in Killarney on his family's farm and attended school in Killarney where he was awarded the Governor General's medal upon graduation from Grade 12. He furthered his education at the University of Manitoba, achieving a Master's degree in Actuarial Mathematics. Brent had a great love of sports and as a child and teenager, he played hockey, baseball and football. As an adult he continued to be involved in all these sports. He served as the equipment manager for the St. Vital Junior Victorias hockey team for the last eight years and was an umpire in city baseball leagues. But his greatest love was football, the CFL and his beloved Blue Bombers. Brent had a heart of Blue and Gold, never missed a home game and rarely missed a Grey Cup game. He loved attending the Grey Cup all across Canada and developed lifelong friendships with other fans of the CFL. He was excited about the new Bomber stadium and already had his tickets for next season. Brent touched many lives and will be sadly missed by his family and all with whom he worked and cheered. A memorial service will be held at the Wheatland Chapel in Killarney, Manitoba on Friday, January 4, 2012 at 1:00 p.m. In lieu of flowers, donations in memory of Brent may be made to Kid Sport Manitoba, 145 Pacific Ave., Winnipeg, Manitoba, R3B 2Z6, http://www.kidsportcanada.ca. Messages of condolence may be made online at www.wheatlandfs.com Killarney Boissevain Funeral Home Ltd. (204) 523-7791- www.wheatlandfs.com