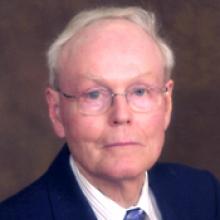 DR. JAMES CAMPBELL MENZIES 1925 - 2012 On Monday, December 31, 2012, at Boundary Trails Health Centre, James Campbell Menzies aged 87 years of Morden, MB, went to his eternal rest. He leaves to mourn his passing four sons, Bob and Kathy Menzies (Heather, Megan, Kathryn) of Morden, Bruce and Wendy Menzies (Hayley and husband, Dana, Jonathan and wife, Courtney, Kara, Thomas) of Neepawa, John and Geri Menzies (Jayme, Allyson, Cameron) of Brandon, James and Kathryn Menzies (Blair, Caitlin) of Winnipeg, one great-granddaughter, Elizabeth Hazel, and a sister, Merle (John) Marowitch. He was predeceased by his wife, Hazel (nee Godkin) in 1996, one granddaughter, Sarah Jane in 1984, one sister, Isabel (Keith) Deans and one brother, Jack (Terri). Jim did his schooling in Morden, studied medicine at the University of Manitoba, and returned home in 1950 to practice with his father. He and Hazel were married in Morden in 1949 where they raised their four boys, and often their twelve grandchildren. He was very active in many aspects of the community, including St. Paul's United Church, Kinsmen, Scouts, and the Friendship Centre. Professionally, Jim was a dedicated family physician and played an important role in the development of patient care and the practice of medicine in Morden and area. He received many awards including the Silver Acorn and Silver Wolf for Scouts, and was named Canada's Family Physician of the Year in 1972. He will be remembered by all for his positive attitude. Funeral service will be held at 1:30 p.m. on Saturday, January 5, 2013 at St. Paul's United Church 353 Thornhill St. in Morden with interment at Hillside Cemetery. If friends so desire, donations may be made in James' memory to the Diabetes Education Resource for Children and Adolescents, c/o Children's Hospital Foundation of Manitoba, 501 840 Sherbrook Street, Winnipeg, MB R3A 1S1 or to the Boundary Trails Health Centre Foundation (Hospice) Box 2000 Winkler, MB R6W 1H8. Wiebe Funeral Chapel, Morden In care of arrangements, 204-822-4755 wiebefuneralhomes.com