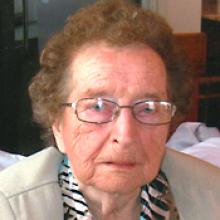 ELSIE ZNAK Elsie Znak, age 88 years of Roblin, MB, passed away peacefully on Monday, December 24, 2012, at Crocus Court Personal Care Home, Roblin, MB. Elsie Yaroshuk was born July 17, 1924, in the Western Ukraine - Austria, a daughter of Proctor and Takilia Yaroshuk. In 1929, Elsie immigrated as a youngster to Canada with her parents settling at Iron River, AB. Elsie received her education at Iron River School and then at the age of 14 she worked as a domestic for neighbours, caring for three children as well as milking cows. She also worked as a domestic at Bonnyville, AB. On March 17, 1940, Elsie was united in Holy Matrimony to Michael Davidovich. Michael was a carpenter in Edmonton for a few years and then built a small store in Sandy Rapids, AB. Later they returned to Edmonton and then purchased a farm at Iron River AB. They were blessed with two daughters, Eileen (Lee) and Eleanor (Ellie). In 1963 Michael passed away and Elsie went to work in a hotel in Bonnyville. Elsie was introduced to Fred Znak through Fr. Orest Sorochuk. In 1966, Elsie moved to Roblin, MB, to keep house for Fred Znak and his daughters Dorothy and Marcia. On January 31, 1967, Elsie and Fred Znak were united in Holy Matrimony in the Chapel of St. Vladimir's College in Roblin. Elsie and Fred farmed in the Postup District north of Roblin until they retired to Roblin in 1974. Elsie was then employed at St. Vladimir's College for 15 years. She was very active in the Holy Redeemer Parish and was always willing to volunteer to help the ladies of the parish. Elsie had been on the Parish Hospital Visiting Committee for numerous years and was also very active in the Roblin Parkinson's Society Support Group. Elsie was predeceased by her parents, Proctor and Takilia Yaroshuk, first husband Michael Davidovich, second husband Fred Znak, two sons-in-law, Norm Matheson and Ron Dubinsky, brothers Nick Yaroshuk and Alec Yaroshuk, sister Tille Yaroshuk, and sister-in-law, Ruth Yaroshuk. Surviving to mourn Elsie's death and cherish fond memories are: four daughters, Lee (Jake) de Champlain of Edmonton, AB, Ellie Dubinsky of Ardrossen, AB, Dorothy (Les) Creek of Dugald, MB, Marcia (Rennie) Thiessen of Winnipeg, MB, sister Katie Palech of Bonnyville, AB, sisters-in-law Mary Yaroshuk of Edmonton, and Sophie Znak of Roblin, grandchildren Roderick Matheson, Tammy Dubinsky, Dustie Dubinsky, Michael Kosc, Christopher Kosc, and Laura (Gem) Creek Newman, as well as great-grandchildren Ashlee, Jessica, and Nevin. Family gathered Friday January 4, 2013, at 7:00 p.m. at the Chapel of Nairn-Chyz Funeral Home, Roblin, MB to pay their respects. Requiem Divine Liturgy was celebrated on Saturday, January 5, 2013, at 10:00 a.m. from Holy Redeemer Ukrainian Catholic Church, Roblin, MB with Fr. Yaroslav Strukhalyak and Fr. Peter Pidskalny officiating, assisted by the Cantor Mr. Victor Sorochuk. The Sacristan was Mr. Peter Kowalyk. Cross Bearer was Mrs. Sylvia Balcaen. Casket Bearers were Jake de Champlain, Rennie Thiesen, Gem Newman, Jerry Hrynkiw, Michael Kosc, Chris Kosc, and Les Creek. Following the Interment at Roblin Catholic Cemetery a Memorial Dinner was served by the UCWL in the lower hall of Holy Redeemer Ukrainian Catholic Church. The family would like to thank all of Elsie's dear friends and acquaintances for their support during her time of need. Special thanks are extended to the Home Care and Crocus Court Personal Care Home staff for their care of our mother. Memorial Gifts to Honour Elsie's Life May Be Given to The Roblin Catholic Cemetery Fund, Box 1449, Roblin, MB R0L 1PO Notes of condolence may be sent to the family by visiting nairn-chyzfuneralhome.com Nairn Chyz Funeral Home Entrusted With Arrangements 204-937-2111