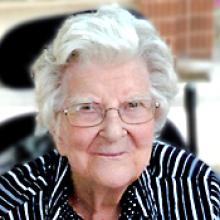 MARY ALICE WOLFE December 18, 1916 - January 4, 2013 Mary Wolfe, beloved wife of the late Albert Wolfe, passed away peacefully at the age of 96 years. She leaves to celebrate her life daughter Janet Wolfe of Winnipeg, son Paul (Barbara) Wolfe of Calgary, Alberta. Missing their grandma dearly are Shelley (Kelly) O'Neill of Calgary, and Connie (Randy) Kloschinsky and her much loved great-grandchildren Bailie and Sydney of Calgary, sister-in-law Myrtle Wolfe of Winnipeg, niece Judy (Ernie) Klohn and nephew Alan (Arleen) Schick of Winnipeg, nephew David (Sandra) Wolfe of Winnipeg and numerous nieces and nephews in BC. Mary was born in Winnipeg, the second youngest of six girls born to Richard and Annie Smith. She met, and married Albert in 1943, being a devoted wife for 65 years. Together they would travel to many parts of North America and Europe, and spent most of their summers and retirement at their cottage in Victoria Beach. She remained a homemaker, a mother, a grandma, and great-grandmother, and for the last eight years, a resident of Middlechurch Home of Winnipeg. She loved life and lived it to the fullest. Funeral Service 11:00 am, Tuesday, January 8, 2013, at Kildonan Community Church, 2373 Main Street with Rev. Brenda Fraser officiating. Funeral home and crematorium 204-774-7474 Condolences: www.bardal.ca
Publish Date: Jan 7, 2013