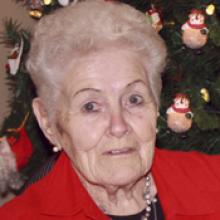 STELLA SCOTT Stella was born Stella Catherine Morden on August 3, 1927. She was the 13th child, out of 14, to William and Agnes (Mitchell) Morden. Stella was the last surviving member of her large and character-filled family. Stella was a caregiver, very friendly, fun loving, and such a people person her entire life. This combination, along with her love of music and dancing, made her the perfect hostess. Her love of people, and caregiving nature, was evident in her work as well. Babysitting, housekeeping, cooking, and waitressing in her younger years. She then worked as a nurse's aide for 15 years at the McCreary/Alonsa Heath Care Centre, until she retired. Stella married her best friend, Elmer Scott, on May 1, 1947, in Neepawa, MB. She and Elmer started their family a year later with the arrival of Carolyn May in 1948, Merlin Elmer in 1951, Geraldine Joyce in 1953, and John William in 1961. They started their marriage living McCreary on 3rd Avenue. In 1960, they moved out to their farm five miles east of McCreary, where Stella resided until her passing. They had enjoyed 63 years of marriage at the time of Elmer's passing in 2010. Stella was small in stature but large in spirit and heart. She touched many people's lives and will be greatly missed, not only by family and friends but for all those that knew her. Stella is survived by her children, daughter Carrie (Bill) Walker, son Merlin Butch Scott, daughter Geri (Murray) Knudson, and son John (Cheryl) Scott. Grandchildren Mark (Cheryl) Walker, Cindy Walker, Cathy (Barry) Renaud, Candi (Kevin) Franko, Kristine (John) Watts, Kevin (Sharisa) Scott, Sherri Scott, Hailey (Jason) Rosin, Scott (Courtney) Knudson, Kenny (Jaylyn), Shauna Scott(Garey), and Myles Scott. Great-grandchildren Dustin James (DJ) Stevens, Shailee Essery, Garrett Franko, Tori Franko, Jack Walker, Kathleen Watts, Jillian Watts, Grady Rosin, Piper Rosin, and Nylah Knudson. Also surviving is her nephew Ralph Fletcher who was like a brother to Stella, her brother-in-law Fred Scott, sisters-in-law Ellie Klapp and Hazel Scott, along with many nieces, nephews, and friends. Funeral Service was held on Friday, January 18, 2013, at 2:00 p.m. at the McCreary Community Hall. Interment followed at McCreary Municipal Cemetery with Father Paul Bringleson. In lieu of flowers, donations can be made to the McCreary/Alonsa Palliative Care Unit Box 250 McCreary, Manitoba R0J 1B0. Dobchuk Funeral Home McCreary, Manitoba Telephone (204) 835-2004 The Heritage of Neill, Dobchuk Anderson, providing over a century of service