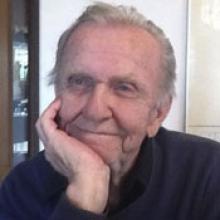 JOHN FREDRICK CLARK October 29, 1931 - January 18, 2013 At Concordia Hospital after a short struggle with cancer. Beloved husband of Colette, John is survived by his children - Wendy (James) Boardman of Thompson, MB, Lori (Bill) Hetland of Kelowna, BC and Naicam, SK, Stan (Joanne) Clark and Fred (Eleanor) Clark both of Surrey, BC, and by his 13 grandchildren, of whom he was immensely proud. He also leaves his brother Bill (Peg) Clark of Calgary, AB, his sister Carol (Garth) Gillespie of Gimli, MB, his first wife Joyce of Surrey, BC, nieces, nephews and cousins as well as many friends and other relatives. He was predeceased by his parents, Stan and Betty Clark. Educated in Kamsack, SK, John earned a BSc and MSc in Agriculture at the University of Saskatchewan in Saskatoon. Most of his career was spent with United Grain Growers in Winnipeg as head of public relations and communication. He is well known for creating Grainews, a plain-spoken "how-to" farm paper written "for farmers by farmers". After 38 years, Grainews is still going strong. John's childhood in the mostly Doukhobor region of Kamsack in the 1930s seemed idyllic. He had many tales of wild adventures, catching gophers and being treed by bears. His family was lucky enough to hear his stories when he told or wrote about his life as a boy in a small town on the prairie. John shared his family's love of animals. He always had dogs by his side. He was never one to keep to the standards of urban living and, at one point, he had ducks, fish, chickens, a raven or two, and even an injured Canada goose at his riverbank home in St. Vital. He loved living by water and enjoyed beautiful homes on the Red River, Dorothy Lake and Lake Winnipeg at Sandy Hook. He was a passionate gardener. His gentle hands nurtured tender begonia bulbs and impatiens seedlings to create magnificent flower beds wherever he was. He also had a house in Texas so he could garden all year round. John had an insatiable curiosity about almost everything in the world. He travelled widely - to Mexico, South and Central America, Europe, Russia, Thailand, and China. He hunted big game in Africa with his brother, Bill. Outgoing, curious and genuine, John had many friends from all walks of life. He had a knack for recognizing the good in people and good guys became his friends. He was a very generous man, often opening his home to those in need and helping them out in very practical ways. He will be missed by many who benefitted from his generous heart. A celebration of John's life will be held March 9, 2013 at 2:00 p.m. at the Neil Bardal Funeral Centre, 3030 Notre Dame Avenue, across from Brookside Cemetery. In lieu of flowers, please consider a donation to the Winnipeg Zoo, the Children's Make a Wish Foundation or a charity of your choice. For further information regarding the service, please contact James Boardman at 204-778-7982 or www.nbardal.mb.ca
Publish Date: Feb 2, 2013