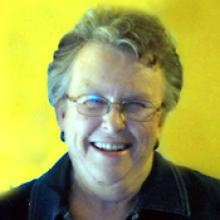 DONALDA (DONNY) BERNICE MCELROY ROGERS (nee SLUTE) 1936 - 2013 On Sunday, January 20, 2013 at Boundary Trails Health Centre with her family by her side, Donny Rogers aged 76 years of Darlingford, MB passed away peacefully. She leaves to mourn her passing her husband, Donald Rogers, three daughters, Brenda and Murray Helps of Darlingford, Lori and Greg Nadin of Darlingford, Jill McElroy and Sheldon Booker of Manitou, one son, Doug McElroy and fiancée, Rhonda Friesen of Darlingford, five stepsons (Randy, Clint, Brent, Jeff, Blair) and two stepdaughters (Lynda, Wanda) as well as numerous grandchildren and great-grand-children. She was predeceased by her first husband, Robert Earl McElroy in 1981. Cremation has taken place. Memorial service will be held on Friday, January 25, 2013 at 2:00 p.m. at St. Paul's United Church, 353 Thornhill St. in Morden. In lieu of flowers, donations may be made in Donny's memory to Boundary Trails Health Centre Cancer Unit or Palliative Care Box 2000 Winkler, MB R6W 1H8. Wiebe Funeral Chapel, Morden In care of arrangements, 204-822-4755 wiebefuneralhomes.com