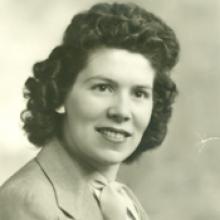 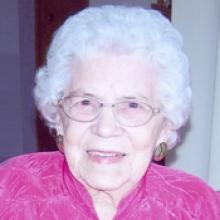 JEANNE VERHAEGHE Peacefully, with family and friends by her side, Jeanne Verhaeghe passed away at St. Boniface Hospital, on February 5, 2013 at the age of 93. Jeanne was predeceased by spouses Alphonse Charles Ducharme (September 1967) and Art Verhaeghe (August 1983), her parents Frederic and Stephanie Restiaux, brothers Eugene, John and Arthur, brothers-in-law Laverne (Tiny) Bales and John Abrahamson, and sisters-in-law Esther (Harry) Restiaux, Josephine (John) Restiaux and Marie-Jeanne (Arthur) Restiaux. Left to cherish her memory is her four children, Lloyd (Marianne) Ducharme, Carole Tremblay, Allan Ducharme, and Perry (Denise) Ducharme, brother Harry Restiaux, sisters Germaine Bales and Terry Abrahamson, 11 grandchildren, numerous great-grandchildren as well as great-great-grandchildren, four stepchildren Bertha (Klaas), Lengyl Yvonne (Charlie) Ricard, Ralph (Diane) and George (Lorraine) Verhaeghe, and her cherished friend Clara Hyde. Mom was born in St. Lupecin, Manitoba on October 2, 1919 to Frederic and Stephanie Restiaux. The family moved to St. Boniface where she went to school at St. Joseph's Academy. Later, working for Mayor Vanbellegam of St. Boniface as a housekeeper and nanny for the princely sum of ten dollars a month, which was a constant reminder to us that she could live very comfortably on. This wage allowed her to buy a bicycle and her first sewing machine. While few have seen Jeanne on a bicycle most have seen her at her sewing machine over the last 70 years. Jeanne Restiaux and Alphonse Ducharme were married on December 17, 1941. Married for 25 plus years. Widowed for six years, Jeanne married Art Verhaeghe in May 1973. Mom was a long time member of the Belgian Club and a lifetime member of the St. Sebastianette Archery Club. She enjoyed her weekly outings including Monday bowling, Wednesday lunch and bingo at Pendergrast Senior Group but her favourite was playing cards with Clara on Saturday. Everyone always says how sweet Mom was - It must have been her sunny smile and her willingness to always look after her "favourite". Some of the more memorable sayings such as "Just do it", "I'm not the cook. I'm a glamour girl" and "Leave the dishes for Clara" reflected her warm, funny, diva side. Services were held Friday, February 8, 2013 at Glen Lawn Funeral Home with Father Ron Leger of Holy Family Parish officiating. Pallbearers were: Al C. Ducharme, Steven Tremblay, Ryan Hart, Wayne Juer, Rick Edwards and Don Newbury. Honorary Pallbearer: Tana Tremblay Thank you to the compassionate doctors and nurses at St. Boniface Hospital Emergency and Intensive Care Unit. A special thank you to granddaughter, Tana Tremblay, for her loving care of Mom in her last years. Family and friends may sign a Book of Condolence at www.glenlawn.ca Glen Lawn Funeral Home 204-982-7550
Publish Date: Feb 9, 2013

JEANNE VERHAEGHE It is with sadness, that we announce the passing of Jeanne Verhaeghe on February 5, 2013 at St. Boniface Hospital. A funeral service will be held at 10:00 a.m. on Friday, February 8, 2013 at Glen Lawn Funeral Home, 455 Lagimodiere Blvd. Interment to follow in Glen Lawn Memorial Gardens. Longer notice to follow. Family and friends may sign a Book of Condolence at www.glenlawn.ca. Glen Lawn Funeral Home 204-982-7550
Publish Date: Feb 7, 2013