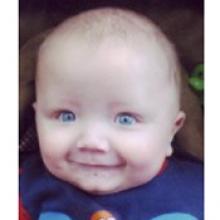 JORDAN GABRIEL CHARLES RIEL April 24, 2012 - February 7, 2013 On April 24, 2012 we were surprised and blessed with Jordan Gabriel Charles Riel who was born two months early. Jordan brought joy with his laugh, smiles and bright blue eyes. Jordan loved people especially his brothers Jayden, Noah and sister Miriam. Jordan's bright blue eyes and smile won the hearts of so many, and will be missed dearly. On February 7, Jordan fell asleep and woke up in Creator's loving arms. Jordan is survived by his mother Carla, brother Jayden, Grandparents Val and Harley, Auntie Charlene, as well as many great-aunties, uncles and cousins. Jordan was blessed to have an amazing foster family, parents Joyce and Randy, brother Noah and sister Miriam. We thank our Creator for every moment and memory that we got to have with Jordan. Prayers/Viewing will be held at the Aboriginal Funeral Chapel, 724 Selkirk Avenue at Parr Street, Tuesday, February 12, 2013 from 7:00 p.m. to 9:00 p.m. Funeral Service will take place also at Aboriginal Funeral Chapel on Wednesday, February 13, 2013 at 10:30 a.m. with Pastor John Neufeld officiating. Cremation will follow. Aboriginal Funeral Chapel 204-586-7700 www.aboriginalfuneralchapel.com