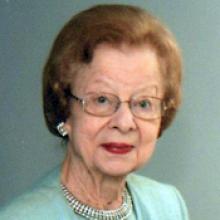 IRENE MARIE LEWIS (nee BILOUS) Peacefully on February 23, 2013, at Burnaby General Hospital, Irene Lewis, aged 91 years. Irene was born in Okno, MB on June 12, 1921, a few hours after her twin sister Anne. Irene only weighed four pounds at birth, barely heavy enough to enter this world. This was the first challenge that tested her resolve and determination. Irene used her indomitable spirit from that first to the very last day of her life. Raised on Selkirk Avenue in Winnipeg's infamous North End, Irene always excelled academically. Her love of learning and her insatiable search for knowledge eventually led her into teaching. She taught in the Burnaby School District for over 25 years, retiring reluctantly at age 65. Early in her career, she used her summers off from teaching to obtain a Bachelor of Arts Degree at the University of British Columbia. Irene inherited a love of music from her parents, especially her father. She was a talented soprano who along with her two sisters performed and recorded as The Bilous Sisters Trio. As a soloist, she won the Tudor Bowl at the 1940 Winnipeg Music Festival. Among their many competitions, concerts and recitals, The Bilous Sisters, as part of their contribution to the War effort, particularly enjoyed singing in concerts for the troops stationed throughout Manitoba. Through her efforts and financial support, Irene was a philanthropist who hoped to provide opportunities to others to attain a better quality of life and further their education through their own hard work. She was selfless in her giving, preferring to honour her parents and her brother through her generosity. Irene was pleased to establish and fund the Dr. Roman Bilous Scholarship Fund at the University of Manitoba, Faculty of Pharmacy, as well as the Dr. Roman Bilous Graduate Study Room at the new Faculty building. Irene is survived by her sister Emelie Bryk; brother-in-law, Alois Decurtins; numerous nephews, nieces, grandnieces and a grandnephew. She was predeceased by her husband Ted Lewis; parents, Thomas and Genevieve Bilous; brother Dr. Roman (Roy) Bilous; sister, Anne Decurtins and brother-in-law, Ray Bryk. A private funeral was held on March 1, 2013 in Winnipeg. Interment followed at All Saints Cemetery, Winnipeg. Special thanks to the doctors and hospital staff at Burnaby General for their care, and to Shane Goodman for his kindness. In lieu of flowers, donations may be made to Holy Family Home, 165 Aberdeen Ave., Winnipeg, MB R2W 1T9. VICHNAYA PAMYAT KORBAN FUNERAL CHAPEL 204-956-2193