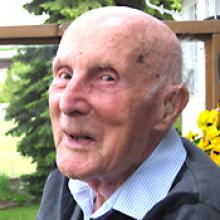 JOHN WATSON GERRARD John Watson Gerrard, O.C., B.A., B.Ch., D.M. and F.R.C.P, passed away peacefully on March 3, 2013. He is survived by his sister, Kathleen Potter, his three sons Jon (Naomi), Peter (Nikki), and Chris (Mary), seven grandchildren, Pauline, Charles, Tom, Sarah, Travis, Philip and Emily, and six great-grandchildren. John was born in Zambia (then Northern Rhodesia) on April 14, 1916 where his father, Herbert Shaw Gerrard, was a medical missionary, ably supported by his wife, Doris. John grew up in England, and obtained his medical degree from Oxford University, where he met his wife, Lilian Elisabeth Whitehead ("Betty"), whom he married August 28, 1941. In the Second World War he served in the Royal Army Medical Corps in North Africa, Italy (Anzio) and Palestine. After the war he trained as a pediatrician at the Children's Hospital in Birmingham, England, joined the staff of the University of Birmingham, and undertook further studies at Johns Hopkins University in Baltimore. In 1955, he and his family moved to Saskatoon where he was founding head of the Department of Pediatrics in the new full Medical School at the University of Saskatchewan, where he remained head until 1971, but continued to treat patients until well into his 80s, as Professor Emeritus of Pediatrics. In 1962, along with Dr. Horst Bickel and Evelyn Hickmans, a biochemist, he was awarded the John Scott Medal by the City of Philadelphia for developing a low phenylalanine diet for the treatment of phenylketonuria (PKU). This, coupled with the work of Dr. R. Guthrie, who developed a test for the early detection of PKU, has enabled affected babies to be put on their special formula soon after birth and to grow up into normal children and adults rather than having an intellectual disability. In Saskatoon, he campaigned with Dr. Buckwold and John Dolan for funds to build what is now known as the Alvin Buckwold Child Development Program. Dr. Gerrard championed breast feeding on the grounds that it provided protection against many infections as well as providing the baby with the best nourishment available anywhere. He conducted much research on allergies, especially milk allergies, and successfully helped many people. He is credited with an early formulation of the "hygiene hypothesis" that a lack of early childhood exposure to infectious agents increases subsequent susceptibility to allergic diseases by suppressing the natural development of the immune system. Over many years he taught hundreds of medical students and helped train over a hundred pediatricians. His care, compassion and warmth were exemplary; many a time he and Betty opened their own home to parents who brought sick children from distant corners of the province but had no means to pay for a hotel room. He calmed the nerves of concerned parents whose children had a variety of illnesses. Indeed, the mention of his name has brought a smile to the many Saskatchewan residents he treated. In 1985, he received the Alan Ross Award from the Canadian Pediatric Society for his contributions to research, education, healthcare and advocacy for the health of children in Canada. He was made an Officer of the Order of Canada in 1998 and was listed in Who's Who in Canada. Since his beloved Betty died in 2008, and he broke his hip in 2010, he received excellent care in the Luther Care Home where he lived for just over two years. In addition he was lovingly cared for by his companions of two and one half years, Alice and Barry from Home Instead. In lieu of flowers, donations can be made to Cosmopolitan Industries at 28 - 34th St. E., Saskatoon, SK S7K 3Y2. The memorial service will be held on Monday, March 11, at 11:00 a.m. at St. James Anglican Church in Saskatoon.