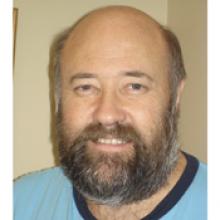 ROBERT MATHEW VERNON July 30, 1960 - March 1, 2013 After a lengthy illness, peacefully with family nearby, Robert died on March 1, 2013 at the age of 52. Rob was predeceased by infant son Christopher, parents Reginald and Katherine of Australia, in-laws Percy and Emily Cassel of Winnipeg, MB. He leaves to mourn, wife Jacqueline Cassel-Vernon, children Peter and Southerly, sister Margaret (Stephen Dean), brothers David (Liz), James (Kaye) and Peter (Jan) of Australia, in-laws Brian (Pat Martin) in Mississauga, Deborah (Daryl Verbeek) in Abbotsford, BC; 11 nieces, five nephews and their partners; great-nieces and great-nephews in Canada and Australia; as well as hundreds of friends worldwide. Born in Tamworth, NSW, Rob grew up there as well as Dubbo, Griffith and finally Manly. In 1988, he packed his swag and went on a walkabout through Europe and England before coming to Canada in 1989. There he met his soul-mate Jacqueline while touring on the VIA Rail train. After a brief stay back home, he moved to Winnipeg and married "Jacq" in 1990. He worked in photography, micrographics and finally in culinary before being forced onto disability. Rob was very active in the community with Tavern's Cricket, the Down Under Club, St. Boniface Children's Place Daycare and various charities. Even when ill he continued to volunteer at the kids' school and St. Boniface Hospital as a pet therapy visitor with our dog Chinook. He adored his kids, loved his wife, enjoyed travel, cricket, scuba, sci-fi movies and fine cuisine. All who knew him loved his chucky Aussie humour and zest for life. His Aussie accent was a big hit with the ladies here in Canada. In keeping with Robert's wishes, cremation has taken place and a memorial service celebrating his life will be held on Saturday, March 9, 2013 at 2:00 p.m. in the Coutu Funeral Chapel, 680 Archibald Street. In lieu of flowers, donations may be made to St. Boniface Hospital Foundation, directed to Kidney Patient Services. The Coutu family in care of arrangements: E.J. COUTU & CO. FUNERAL DIRECTORS 680 Archibald Street 204-253-5086 ejcoutu.com