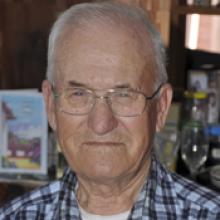 WILLIAM (BILL) FEDORCHUK It is with great sadness that we announce the passing of Bill Fedorchuk on Sunday, March 10, 2013 surrounded by his family, at Vita Hospital. Bill was predeceased by his wife Rose, his parents, Annie and Hryhor Fedorchuk and stepfather Joseph Bil, all of Tolstoi, Manitoba; and brothers-in-law Maurice Romaniuk, John Grabowiecki, Vladimir Kozak and Steve Antoniuk. Left to cherish his memory are his son, Ken (Deb), and daughter, Theresa (John); granddaughters, Dana Scrivens (Byron), Hailey and Kayla Fedorchuk; grandsons, Scott (Jennifer) and Curtis Fleming; great-grandson Will Fleming and two more great-grandsons arriving in April and July; sisters, Mary Paradoski (Stan) and Sonia Romaniuk and sisters-in-law Theresa Antoniuk, (friend, John) Bernice Murphy (John), Eleanor Hart (Lawrence), Sylvia Fjeldsted (Kris) and Betty Kozak. Also left to cherish his memory are numerous nieces and nephews. Bill was born on the Fedorchuk homestead just northwest of Tolstoi, Manitoba on March 20, 1931. He attended Zelota School. Bill married Rose on October 22, 1955 at the Sacred Heart Ukrainian Catholic Church in Tolstoi. Bill and Rose settled on the Fedorchuk century farm where they raised their family. Bill was a farmer all of his life. He loved farming and enjoyed driving around looking at the crops coming up each season. In 1974 he took seasonal employment with the City of Winnipeg at the Assiniboine Park and Zoo. He spent numerous years commuting to Winnipeg for this employment but continued to farm as well. He thoroughly enjoyed working in Winnipeg. He met many new people who became lifelong friends. While working at the park Bill learned more about gardening which he in turned shared with Rose. In 1970 and 1972 Bill and Rose won the Farm Home Award in the Dominion City, Emerson and Tolstoi area. In 1991 Bill and Rose won the Manitoba Good Road Competition for the best Farm Home Grounds in the Eastern District and the provincial award for the Best Farm Home Ground Competition. Bill had a great sense of humour and was quite a history buff. He will be remembered for entertaining friends and family with wonderful stories of the past. He had an incredible memory for dates and if truth be known he may have possibly embellished on a few dates and no one was ever the wiser! Bill was an avid pet lover and enjoyed many years with his two favourite dogs. He enjoyed going each morning to the "corner" to have coffee with his buddies. Bill and Rose were well known for great entertaining and no visitor ever left the farm without a hearty meal under their belt. The family would like to thank the health care providers at Vita Hospital for their care and compassion. Special thanks to Dr. Lisa Earle for the care she extended to Dad and the South Eastman Palliative Care Program. The family would also like to acknowledge Bill and Rose's many friends and neighbours that were a main staple throughout their lives in Tolstoi. Especially for Bill in his last nine months of his life for all their help and support. A Prayer Service will take place Friday, March 15, 2013 at 7:00 p.m. at the Vita Funeral Home, Vita, Manitoba. Funeral Service will be held Saturday, March 16, 2013 at 10:30 a.m. at the Vita Funeral Home. Interment to follow at the Sacred Heart of Jesus Ukrainian Catholic Cemetery. In lieu of flowers, donations may be made to the Sacred Heart of Jesus Ukrainian Catholic Cemetery fund or a charity of their choice. Vita Funeral Home In Care of Arrangements, 1-204-425-3114