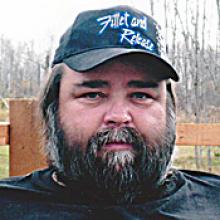 DONALD ANDRUSIAK Sadly, on March 15, 2013 Donald Andrusiak passed away after a lengthy illness. Donald was born on September 4, 1960 and spent his whole life in Sundown. He grew up helping his father work the family sawmill and planer before taking a job with the Department of Natural Resources as a forest fire fighter. Through his adult years, he tried his hand at various jobs before getting a truck and operating his own cattle hauling business. He was very proud of Don's Trucking and drove for years. He then became a bus driver for the Borderland School Division and an Educational Assistant. This position brought Donald great joy, he loved working with students until he was no longer able to as his own health began to decline. Donald is survived by his devoted wife Serena, his son Miles, sister Virginia Holden (Jim) and brother Julian (Joy) as well as many other family members. Don was predeceased by his parents, Irene and John and sister Darlene in infancy. A Funeral Service will be held on Wednesday, March 20, 2013 at 2:00 p.m. in the Sundown Hall with interment to follow at Menisino Cemetery. Vita Funeral Home in Care of all arrangements.