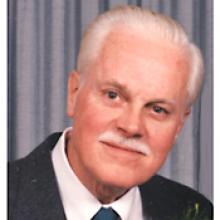 DAVID ALEXANDER SHEARER May 15, 1927 - March 21, 2013 Predeceased by his sister Alberta and his son David. Survived by his wife Betty, his sister Mary, his children Jim, Catherine (Ron) and Doug (Aandra), and his grandchildren Justina, Dustan, Victoria, Kurtis, Jessie, Elizabeth, Marta, and Lola. David was born in Winnipeg and graduated from St. James Collegiate. From an early age, his abiding interests were music, math and mechanics. After playing clarinet with Sea Cadets as a teenager, he joined and wrote arrangements for various musical outfits throughout and after high school. Touring took him through Manitoba and across Canada. Blessed with perfect pitch, he later added baritone and tenor sax, bassoon, contrabassoon, flute and piccolo to his repertoire. David played with the Saskatoon and Winnipeg Symphony orchestras, The Gar Gillies Band, Rainbow Stage, MTC, The Hollow Mug, at Manitoba's beach dance halls, and for countless events with various bands over a 70-year career. It was while playing for the CBC that David fell in love with the payroll clerk there. Betty and David were married in 1955, and remained together until the end. Throughout his adult life, David pursued parallel musical and engineering careers. He earned a bachelor of mechanical engineering from the University of Manitoba in 1956 and a master's degree from the University of Saskatchewan in 1961. Betty and David spent a year in Cleveland where he worked for the Bailey Meter Company, and two years in Saskatoon before settling back in Winnipeg. He worked at Manitoba Hydro until his retirement in 1992, specializing in the design and construction of hydroelectric power stations in northern Manitoba. David loved to spend time with Betty and their children at the family's Lake Winnipeg cottage. He and Betty also enjoyed long daily walks with their dog along Wellington Crescent. He loved building, wiring, plumbing, and fixing things with his precision instruments and tools. This included the artful repair of furniture salvaged from back lanes near their River Heights home. David was happily obsessed with puzzles and all things mathematical, and he regularly exchanged math problems by mail with his closest friend Dave Reid. Italian food, red wine, family dogs and the night sky were some of the things David drew pleasure from. His high standards, love of knowledge, charisma, and sense of humour continue to provide inspiration to his grandchildren. Fiercely intelligent and uncommonly gifted, David never stopped challenging himself and stayed curious until the end. In lieu of flowers, donations may be made to the Shearer Bursary in Music at the University of Manitoba. A memorial service will be held at 1:30 p.m. on Sunday, April 14, at the Niakwa Country Club, 620 Niakwa Road, Winnipeg.
Publish Date: Apr 6, 2013

DAVID ALEXANDER SHEARER After a lengthy hospital stay, on March 21, 2013, aged 85 years. Survived by his wife, Betty, his children, Jim, Catherine (Ron) and Doug (Aandra), and his seven grandchildren. Memorial to be held on the weekend of April 13 and 14, 2013. Details and full obituary to follow.
Publish Date: Mar 23, 2013