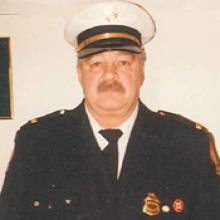 ROBERT (BOB) JAMES CHEADLE RETIRED BATTALION CHIEF WINNIPEG FIRE DEPARTMENT March 17, 1938 - March 27, 2013 On Wednesday, March 27, 2013 Robert James Cheadle passed away at the Grace General Hospital. Left to cherish Robert's memory are his partner Patricia Vledder; brother Harold; sons Robert (Angela), Dwayne (Shari) and Grant; daughters Cheryl and Sandra (Guy); as well as by grandchildren Erika, Courtney, Carl, Jessica, Jordan, Christie, Cody, Blaine, Roxanne and Courtney. He was predeceased by his parents Elsie and Harold Cheadle, and his brother Arthur Cheadle. Robert grew up in the Brooklyn's neighbourhood of Winnipeg and lived for a time in Stonewall, Manitoba. He joined the St. James Fire Department on June 1, 1959 and retired from the City of Winnipeg Fire Department as Battalion Chief after 37 years of service. Robert enjoyed golfing, camping, playing online poker and going to the Refit Centre where he made many friends and acquaintances through these hobbies and activities. A celebration of Robert's life will be held on Thursday, April 11, 2013 at 1:00 p.m. at the Army, Navy, Air Force Unit #283 - 3584 Portage Avenue, Winnipeg. We hope you can attend. In lieu of flowers, we ask that donations be made to the charity of your choice. Wojcik's Funeral Home & Crematorium, www.wojciksfuneralchapel.com, 204-897-4665.