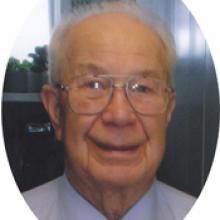 ROY RICHARD THOMAS May 27, 1925 - April 2, 2013 It is with heavy hearts that we announce the passing of Roy Thomas of Neepawa, MB, at the age of 87. He will be greatly missed by his sons and their families: Tom and Lori, and their children, Tyler, Teighan and Troy, of Winnipeg, and Mark and Shauna, and their children Brandon and Heather, of Brandon. Roy was predeceased by his wife Betty in 2002. Roy was youngest son to George and Beatrice Thomas (deceased) and baby brother to Beatrice Grant (deceased), Stanley Thomas (killed in action in the Second World War), Jack Thomas (deceased) and Mary Rivers (Fonthill, ON). Roy was well respected by all who knew him. After spending his early years in Neepawa, Roy offered his life in service in the Canadian Navy as a teenager and served overseas on the Loch Alvie Second World War. He loved to share the stories of his adventures chasing u-boats and taking part in the Murmansk Run. When he returned to Neepawa after the war, Roy joined his brother, Jack, in partnership in a carpentry business, Thomas Cabinet Works. This later became Thomas Window & Door. He continued this business for 52 years, retiring at age 73 when they sold the business in 1999. Roy met his wife Betty in Neepawa and they were married in 1953. Roy built their family home himself, the yellow house with the picket fence on the hill at the east entrance to Neepawa. Betty and Roy raised their two sons there. As a family man, Roy never missed a hockey or baseball game of Tom nor a basketball or badminton game of Mark, and cared for Betty through breast cancer in the 1960s and as cancer struck again in 2001. As a loyal citizen of Neepawa, Roy again offered his life in service as a volunteer firefighter. He served in that role for almost 25 years, the last few as Deputy Fire Chief. Upon his retirement from the Neepawa Fire Department, he was made an Honourary Citizen of the Town of Neepawa. Roy continued as a member of the Neepawa Legion for his entire adult life and was proud to be part of the Honour Guard numerous times. Roy never fully retired, because after selling Thomas Window & Door he started another business as a locksmith which he continued until 2009. Roy was well known for his green thumb, helping to run the family greenhouse in the 1970s. When he had his own garden, he grew a fabulous one and was famous for the tomatoes that he would share each summer; tomatoes so large that one slice would fit a sandwich! Roy spent the last three-and-a-half years of his life in the care of the wonderful staff at Country Meadows Care Home in Neepawa. We are ever grateful to them for their attention and thoughtfulness. We are also grateful to the caring staff at Neepawa Hospital and Mary Ellen Clark, and the Palliative Care volunteers who made his last few days comfortable. A celebration of Roy's life took place on Friday, April 5 at 2:00 p.m. in the Neepawa United Church. In lieu of flowers, if so desired, please make donations in memory of Roy to a charity of your choice or to the Beautiful Plains Community Foundation. White's Funeral Home - Neepawa in care of arrangements.
Publish Date: Apr 6, 2013

ROY RICHARD THOMAS Roy Richard Thomas entered into rest on April 2, 2013 at the Neepawa Health Centre at the age of 87 years. The funeral service will be held on Friday, April 5, 2013 at 2:00 p.m. at the Neepawa United Church, Neepawa, MB, interment will follow in the Riverside Cemetery. In lieu of flowers donations may be made to the Beautiful Plains Community Foundation, Box 486, Neepawa, MB R0J 1H0 or a charity of choice. White's Funeral Home Neepawa in care of arrangements. 204-476-2848
Publish Date: Apr 4, 2013