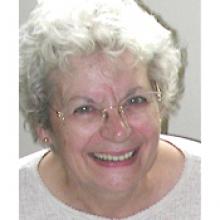 DELLA MARIE ANNETTE DANKO (nee DESROCHES) Peacefully, with family surrounding her, Della passed away at Riverview Health Centre on Tuesday, April 16, 2013 at the age of 79. Della leaves her husband of almost 54 years, Donald, along with their five children, John (Shelley), Kathie, Anne (Petr), Donna and Mark and three grandchildren, Peter, Michael and Katherine. Della is survived by her sisters, Gertie, Delphine and Annette, her brother Gilles (Lottie), numerous nieces, nephews, cousins, and friends. She was predeceased by her parents, Valmour and Marie Desroches, her brother Joe, and her sisters Germaine and Donalda, as well as her beloved mother and father-in-law, Kay and John Danko. Born in Laurier, MB, Della initially trained as a teacher and taught in St. Adolphe, St. Agathe and St. Boniface. She and Donald were among the first families to settle in Thompson, MB, where they raised their five children. It was in Thompson that Della developed her passion and reputation for oil painting and gardening. When the family relocated to Sudbury, ON, Della used her teaching experience in her work with the Catholic School System and the City of Sudbury Library system. She also cultivated a wonderful backyard retreat and couldn't wait to get into her garden every spring - "dirt under your fingernails is good for the soul" were words she lived by. In retirement, she and Don spent much of their time travelling throughout North America and Europe, visiting with friends and family along the way. In 2010, Della and Don moved "home" to Manitoba to spend the rest of their years. She had a loving and caring spirit that will live on in all whose lives she touched. The family would like to thank the dedicated and caring staff of Riverview Palliative Care Unit, and CancerCare Manitoba who each played a role in making her last weeks and days as comfortable as possible. A Mass of Christian Burial will take place at 11:00 a.m., Saturday, April 20 at St. Ignatius Roman Catholic Church, corner of Stafford and Corydon. Reception to follow. If desired, donations can be made in Della's name to CancerCare Manitoba, Riverview Health Centre or to the Laurentian University Danko Family Bursary. 204-586-8044
Publish Date: Apr 19, 2013