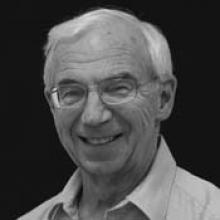 JOHN MURRAY STANDING November 21, 1931 - April 18, 2013 It is with sadness that we announce the passing of John Murray Standing. He will be deeply missed by Coralie, his wife of almost 57 years; children Barbara Frame (Craig) of Fredericton, and Kathy Strachan (Keith); grandchildren Christopher Frame (Amanda) of Halifax, Geoffrey Frame of Calgary, Hannah Strachan (Lucas Kingyens), Alexander Strachan, and great-granddaughter Ava Kingyens. He will also be missed by his brothers Ken and Harold (Brenda), and his brother-in-law Gary Cutler (Gerry). John is predeceased by his parents Elsie and Graham Standing, and sister Kathleen Taylor. John began his teaching career at J.B. Mitchell School and then on to Kelvin High School where he taught Music, English and French until his retirement in 1987. After retirement he continued his keen interest in the Winnipeg Music Festival, serving as their Executive Director for two years. From an early age John was a church organist, meeting his future wife, Coralie, at Chalmers United Church in 1952. He was organist and choir director at Regents Park United Church, and choir director at Westworth United Church and St. Andrews River Heights United Church, retiring in 1998. He directed many community choirs throughout his life including the Grad Choir, Manitoba Youth Choir, National Youth Choir, Polish Sokol Choir, Winnipeg Girls Choir, as well as the chorus of the Manitoba Opera and Gilbert and Sullivan Society of Winnipeg. He was an active adjudicator and clinician throughout Canada. He felt strongly about the pursuit of excellence and would not accept anything less than the best. His mark on the life of choral music in Winnipeg will not be forgotten. He loved his wife, children and grandchildren deeply, and more recently found great joy in his new great-granddaughter. John loved to entertain and valued meals with dear friends, and family dinners with good food, wine and laughter. Throughout the years there was nothing he liked better than to invite huge numbers of choir members to parties and serving aptly named punches to mark the occasion. John's family would like to thank their family and friends for their support throughout his illness. There will be a celebration of John's life on Thursday, April 25, 2013 at St. Andrew's River Heights United Church at Oak Street and Kingsway at 7:00 p.m. In the half hour prior to the service there will be recorded music from many of the choirs John has conducted over the years.
Publish Date: Apr 20, 2013

JOHN MURRAY STANDING It is with sadness that we announce the passing of John Murray Standing on April 18, 2013. A longer obituary will follow on Saturday, April 20, 2013.
Publish Date: Apr 19, 2013