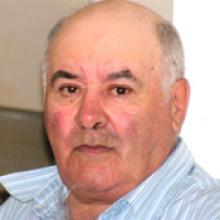 ALEXANDER ALEXIUK 1942 - 2013 Alexander passed away at the Bethesda Hospital Steinbach, Manitoba on April 15, 2013 at the age of 70 years after complications with Diabetes and emphysema which he had to deal with for many years. He was born to George and Stella Alexiuk on June 15, 1942 at Sundown. Alexander was predeceased by his parents, sister Rose, brother Frank, and brother-in-law George Shepit. He is survived by his sister Lillian Shepit, brother Fred, and sister-in-law Olga Alexiuk. nephews Eugene, Dennis, Gerald, Edward, and Kevin. nieces Beverly, Elaine, Nancy and Crystal and many grand nieces and nephews. Alexander worked construction, forestry and various other job as well as helping out neighbours. He enjoyed the outdoors, cutting firewood, picking mushrooms, blueberries, and cranberries. He had secret mushroom and berry picking spots. Alexander was also an expert hunter. Dennis and his friend Olgi would accompany him, and Olgi is very proud to be his adopted niece. Alexander also loved to play tricks on everyone from stuffing garlic skins and bacon ends to twigs and pebbles in your shoes. Funeral Service will be held on Monday, April 22, 2013 11:00 a.m. at Vita Funeral Home 256 Railway Avenue, Vita, Manitoba with burial at Sirko Cemetery South of Sundown, Manitoba. Should friends so desire donations may be made to a charity of your choice. "Vichnaya Pamyat" Arrangements Entrusted with Vita Funeral Home (204) 425 3114