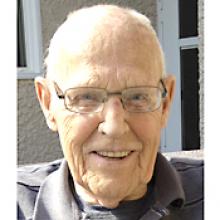 DR. JOHN VANDERSTOEL B.A, B.Ed., M.Ed., PhD July 23, 1933 - April 19, 2013 It is with great sadness and some disbelief that we announce the passing of John Vanderstoel, loving husband of Marie. After a lengthy illness John passed away "peacefully but fighting all the way" as he referenced in his own words. John leaves behind his beloved wife Marie, of 56 years, daughters Cindy Johnson and husband Wayne Macaulay (Kale, Drew, Tanner and Bruce), Debbie Storie and husband Tim (Nicole, Angela and Natasha), and son Michael; also great-grandchildren Luca, Alexis, Dareus, Aurora and Kiara. He is survived by his brothers Rudy and Nico, sisters Connie and Toosje, brother-in-law Hugh, and by brothers-in-law Boyd, Stan, Allen and Gerald Keown. John had numerous nieces and nephews who were very special to him including Ginger Keown and partner Patrick (Estella, Gavin and Felix) whom he thought of as his daughter and grandchildren. John was predeceased by his mother Anthonia and father Nicolaas, sister Nell and sister-in-law Heather, father-in-law Martin Keown, mother-in-law Dorothy Keown, brother-in-law Lyle, and sister-in-law Judy. John was born in Rotterdam, the Netherlands. He, along with his parents and siblings, landed in Halifax on April 1, 1953. He was happy to celebrate the 60th anniversary of his arrival in Canada this year. John began his teaching career at Chicken Hill School in Windygates, Manitoba and moved from there to La Riviere and Stonewall before settling in Winnipeg. He began work as principal of Chapman School in Charleswood. In 1964 he went to the United College (now the Collegiate at the University of Winnipeg) where he spent many happy years teaching. He eventually moved into administration, first as Dean of Collegiate and then as Dean of the Faculty of Education and Director of Continuing Education. Throughout his career he influenced the lives of many students. He served on numerous committees including Chairman of Education, Chairman of Admissions and Chairman of the Awards Committee. John retired in 1991, however, he remained active teaching education and distance ed courses through the University of Manitoba. John met the love of his life Marie (Keown) while teaching at Chicken Hill School and they married on October 5, 1957. John loved to travel and took his young family on many camping trips across Canada and the U.S. Many happy hours were spent in the car singing, playing I spy', licence plate and number games. After retirement John and Marie travelled and cruised extensively. Some of the holidays they enjoyed were in England, Holland, Germany, France, Portugal, Hong Kong, Alaska, the Caribbean and destinations throughout Canada and the U.S. They also spent several weeks each year at Clear Lake entertaining family and friends. John was an accomplished artist and chess player. He loved to golf with his friends and was an avid card player teaching his grandchildren the art of a good game of crib. He and Marie took up square dancing. They loved dancing and the many friends they made along the way. John and Marie were president of the Square and Round Dance Association of Manitoba. They planned and organized many of the dances they attended. They eventually became winter Texans' in Pharr, Texas where they danced the winters away. John and his family would like to thank the support and professional staff at St. Boniface and Grace Hospitals as well as the Winnipeg Fire and Paramedic Service. Special thanks to Sam and the many friends who helped out along the way. A gathering of John's family and friends will be held on Saturday April 27, 2013, 2:00 p.m. at Chapel Lawn Funeral Home, 4000 Portage Ave. A private interment will be held at a later date. Anyone wishing to give personal remembrances is invited to do so immediately after the service. In lieu of flowers, donations may be made to the Assiniboine Park Conservancy or the charity of your choice. ALWAYS ON OUR MINDS, FOREVER IN OUR HEARTS Wiebe Funeral Chapel, Morden In care of arrangements, 204-822-4755 wiebefuneralhomes.com