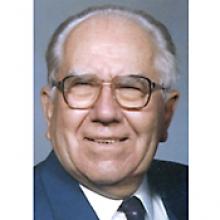 PETER FREDERICK KUTCHER 1918 2013 It is with deep sadness in our hearts that we announce the passing of Peter Fred Kutcher, beloved husband, father, grandfather, brother and friend on May 2, 2013. He leaves to mourn his passing his darling wife of 71 years, Jennie (Johanna), daughter, Doreen Mapstone (Gary Hubble), her son Jack Mapstone (Sue), their children Brooke and Letesia, daughter, Thelma Hitchen (Bob), their children David Hitchen (Pam Vialoux), Kevin Hitchen, daughter, Audrey Blommaert (Ray), her children Chris Hallick (Tara Jones), his children Amanda, Kassie, Michael, Joel Hallick (Noreen), Jennifer Hallick (Charles Murray), their son Ulysses, daughter, Anita Krushel (Garry), their daughter Lindsay Livingston (Ian), son Paul Kutcher (Pam), their children Jessica Forsman (Cody), Casey Kutcher (special friend Riley Marsh), son, John Kutcher (Rev. Debbie McMillan), sisters, Olga Code, Mildred Krasovitch, Isabel Christie and brother, Joe Kutcher. He was predeceased by his parents, Michael and Anne Kutcher, sisters, Mae Lafond, Florence Bedford, brothers-in-law, Napolean Lafond, Gordon Bedford, Peter Code and son-in-law, Chester Mapstone. Peter was born on June 23, 1918 in Sclater, MB. He grew up in Beaver and then Makinak where he completed his high school by correspondence. After attending Norma School, he taught in the one room Gilbert School in Shortdale, MB for two years and then he moved to teach on the Erinview School southwest of Inwood, MB. There he met a young woman, Jennie (Johanna) Johnson, who captured his heart and they married on April 4, 1942. In the fall of 1942, Peter went to war, training first at McGill University in Montreal, and then serving three years in England, Scotland, France and Belgium as a radio and radar technician for the RCAF. Upon his return he took a job teaching to complete the six months of a school year and decided that this as to be his career. He taught in the communities of Oakner, Plum Coulee, Cypress River, Austin and Morden. After over 40 years of teaching which included 17 years as Principal, he retired in 1978. One of his proudest accomplishments was being able to teach some high school subjects to each of his children. Peter was a very devoted and hard working father. He did whatever he could to provide for his family. In the early years while living and teaching in Oakner, he ran a trap line, collecting pelts that he sold for extra income. For many years he hunted and fished bringing home a deer almost every fall, many ducks and lots of fish to add to the family larder. Later on, he decided to further his education and for years he went weekly to night classes and summer school at the University of Manitoba, successfully completing his B.A, B.Ed. and M.Ed. degrees. Peter played hockey in his younger years in the rural league during the years we lived in Oakner. After moving to Plum Coulee he joined the baseball team and the result of that venture was the honour of having his name in the Manitoba Baseball Hall of Fame because the Plum Coulee Pirates won the Eastern Manitoba League title as well as many tournaments between 1955 and 1960. He curled during the winter in several of the communities in which he lived. Due to his interest in wildlife, Peter joined the Game and Fish Association in Plum Coulee and then chaired the first Manitoba Wild Gobblers Association. Their purpose was to introduce wild turkeys into southern Manitoba which they did quite successfully. After moving to Morden in 1964 to teach high school, Peter became involved in the Morden Rifle Club of which he was the treasurer for 24 years. Weekly meeting consisted of target practise in the local rifle range. He was quite a good shot! He earned many trophies and awards for marksmanship. From 1968 to 1976 Peter was a member of the Recreation Commission which saw the development and construction of the new Morden Recreation Centre. He was also involved in the planning of the first Morden Legion House apartment for seniors and in the development of the Morden Senior Centre. He was a long term member of the Christian Programs Committee which brought many good speakers and musical events to the area. Peter's faith in God was the mainstay of his life. He gave much of his time and energy to helping the church, serving as an adult Sunday School teacher, board member and treasurer. He was still contributing his time and doing a financial task for the church up until the end of October 2012 at which time he also gave up driving his car! He continued gathering with several other men from the community for prayer breakfast every Friday morning until he was no longer able to do so. His love of music was evident in his early life as he spent time playing the harmonica and the guitar sometimes at the same time. He often accompanied Jennie as she played her violin at local dances. Their musical abilities were passed on to their children and he enjoyed very much hearing his family sing and play musical instruments in church and on other occasions. Family was always very important to our dad and he frequently told us how proud he was of us all. We appreciated his support for everything we did. Up until his last day, he focussed his thoughts on his family and expressed his love for us all. We rest in the assurance that he is basking in heaven in the presence of the God he served so faithfully. We miss you and love you, Dad but we know you are at peace. Funeral service will be held at 2:00 p.m. on Tuesday, May 7, 2013 at the Church of God 141 6th St. in Morden with interment to follow at Hillside Cemetery. If friends so desire, donations may be made in Peter's memory to World Vision 1 World Drive Mississauga, ON L5T 2Y4. Wiebe Funeral Chapel, Morden In care of arrangements, 204-822-4755 wiebefuneralhomes.com