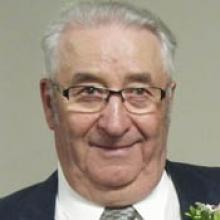 NICHOLAS DIDKOWSKI 1926 - 2013 It is with deep sadness and sorrow that we announce the passing of Nicholas Didkowski, beloved husband, father and grandfather on Tuesday, May 7, 2013 at Boundary Trails Health Centre. He will be sadly missed by his loving wife of 61 years, Susan (nee Hildebrand) Didkowski, son, Paul Didkowski of Snowflake, daughter, Debbie Homik (Lawrence) of Howden, son, Grant Didkowski of Snowflake and daughter, Sandra Payette (Wayne) of LaSalle. He also leaves to mourn and will be dearly missed by his five precious grandchildren, Michael Hudson, Mark Hudson, Brendon Payette, Samantha Payette and Joelle Payette. Nick is also survived by three brothers, Stan (Marylou) Didkowski, Mike (Ella) Didkowski, Maurice (Jean) Didkowski and three sisters, Ruth Ternent, Ann (Roy) Darke, Nancy Didkowski as well as several nieces and nephews. He was predeceased by his parents, Paul and Nadia Didkowski and sister, Mary Antioniak. Nick was born on August 2, 1926 in Korostyn, Ukraine. He immigrated to Canada with his parents and sister, Mary in 1928. Upon their arrival to Canada, they settled in Tolstoi, MB then in 1936 they moved to Dominion City where they began farming. In 1942, his family moved to Snowflake, MB where they continued to farm and attend school. On July 28, 1951, he married Susan and remained in the community of Snowflake where they farmed and raised four children. November 2002, Nick and Susan moved to Manitou. Nick continued to be active on the farm and harvested his last crop in the fall of 2012. Outside of farming he was active for several years as a counsellor in the RM of Pembina and the hospital board. He very much enjoyed and continued curling until about two years ago. Nick and Susan were able to enjoy travels to Arizona, Texas, Florida and went on a Caribbean cruise. Nick continued to be very active until his recent short battle with leukemia. You are at peace now. We will forever miss you and love you. Until we meet again. There will be no public viewing. Celebration of life service will be held at 1:00 p.m. on Saturday, May 11, 2013 at Westside Community Church, 831 Thornhill St. in Morden with a private family interment prior to the service at Snowflake Cemetery. We would like to express our sincere appreciation for the support received during this time. A special thanks to Dr. Jackson, the medical and palliative staff at Boundary Trails Health Centre for the tender and comforting care you gave to him. If friends so desire, donations may be made in Nick's memory to the Boundary Trails Health Centre Foundation Memory Tree (assistance for palliative care and spiritual care programs) Box 2000, Winkler, MB R6W 1H8. Wiebe Funeral Chapel, Morden In care of arrangements, 204-822-4755 wiebefuneralhomes.com