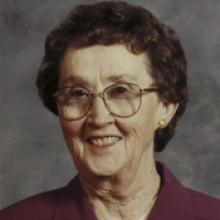 VIOLA MARION (LAW) MARCISKI Peacefully, with her family by her side, Viola Marciski passed away at the McCreary/Alonsa Health Centre on Saturday, May 11, 2013, at the age of 85 years. Vi was born March 2, 1928 at McCreary, Manitoba into a family of seven brothers and two sisters. She was the youngest daughter of Reginald and Emily (Butterfield) Law. She completed high school in McCreary in 1946. Due to a severe shortage of teachers at the time, young high school graduates were being recruited and so, just barely out of school herself, Vi went to teach for one year at the rural school of Oak Leaf, near Birnie, Manitoba. The following year Vi took teacher training at the Normal School in Winnipeg. She then taught school at Westbourne, The Pas, Neepawa and Carman. Viola married Emil Marciski on July 23, 1954, at the United Church in McCreary, Manitoba. They lived in the Glenhope area where she taught at the Armstrong School for several years and she then taught at Alonsa, Manitoba for two years. In 1967, Vi and Emil moved to a farm near McCreary and she took a break from teaching to raise her family. She resumed her teaching career with the Kindergarten class at the McCreary School and retired in 1987. Vi was active on many boards and committees - McCreary Heritage Advisory Committee Treasurer, McCreary Busy Hands 4-H Leader, a member of the Hospital Auxiliary, singer in the McCreary United Church Choir and she was very active with the McCreary Drop-In Centre, U.C.W., and Legion Ladies Auxiliary. Vi enjoyed music and dancing, her garden, flowers, visiting with friends, neighbours and relatives and especially enjoyed spending time with her husband, children and grandchildren. Viola is predeceased by her parents, Reginald and Emily Law; her parents-in-law Joseph and Sophie Marciski; infant grandson, Davis Marciski; siblings Orval (Mable) Law, Jack Law, Clarence (Josie) Law, Harold (Doris) Law, Leonard Law, Merle (Joe) Newman, also brother-in-law Seldon Buchanan and sister-in-law Eva Law; and Emil's siblings Katie (Andrew) Duchnycz, Mike (Marge) Marciski, Albert (Helen) Marciski, and Walter Marciski. Left to cherish Viola's memory is husband and best friend of almost 59 years, Emil Marciski, son Dale (Gina) and their son, Geoffrey; daughter Kathy (Carl) Walton and their sons Andrew and Chris; daughter Pamela (Russell) Sul and their children Taylor and RJ; and son Stephen (Jennifer) Marciski and their children, Beau, Sydney and Owen; sister Dora Buchanan, brothers Norman Law and Russell Law, sister-in-law, Gladys Law, numerous nephews, nieces and friends. Funeral service will be held on Saturday, May 18, 2013 at 2:00 p.m. at the McCreary Community Centre with Rev. Neil Strohschein officiating. Interment at a later date. In lieu of flowers, donations in Viola's name may be made to Central Plains CancerCare; Muscular Dystrophy Canada, or to a charity of your choice. Dobchuk Funeral Home in care of arrangements.