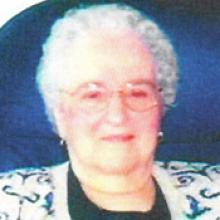 MARIE THERESE (ROY) RIOUX August 1, 1916 - May 14, 2013 On May 14, 2013, our loving mother, grandmother, great-grandmother, Thérese, was surrounded by her family at the Repos Jolys in Saint-Pierre-Jolys, Manitoba. She will be loved and cherished forever by Anita (Donald Catellier), Denis (Rose), Gilbert (Lorette Marion), Etienne (Rita Bohémier), Doris Bérard Trudeau (Claude Trudeau). Her many grandchildren will miss and remember tenderly their Mémère Rioux': Claude Catellier (Shannon), Gilles Catellier (Sheryl), Jacqueline Catellier Brennan, Diane Catellier (Annie), Alain Catellier (Jacquie), Lise Rioux Mushumanski (Grant), Susanne Rioux McCarthy (Paul), Claire Rioux Beaudette (Marc), Robert Rioux (Corinne), Marc Rioux (Lori), Carole Rioux Oucharek (Robb), Michel Rioux (Shannon), Miguel Rioux (Andréa), Louanne Rioux Leblanc (François), Maxine Bérard Luong (Mike), Joël Bérard, and Renée Bérard Lambert (Joël). Her memory will live on through her 34 great-grandchildren. She will be remembered fondly by her many nephews and nieces. Mom was predeceased by our father, Achilles (December 4, 1984), her nine brothers and one sister, her son-in-law, Guy Bérard, her daughter-in-law, Justine (Rickie). She leaves behind her sister, Gertrude Lavallée, her sisters-in-law, Noëlle Roy, Germaine Roy, Agnès Roy and Léopoldine Rioux. Mom was born by Roy's Lake in a log cabin in Fisher Branch, Manitoba to Charles and Zéphérina Roy and her childhood was spent in Aubigny, Manitoba, until she married and moved to Saint-Pierre-Jolys where she raised her family. She toiled tirelessly on the farm, and was the assistant cook at the DeSalaberry Hospital for many years. Her sewing talents were esteemed by all, her cooking abilities without a recipe' were held in awe for everyone lucky enough to sit at her table. Every life's challenge was met with integrity and moral fortitude. She was a strong woman une femme forte' - a true pioneer. Her Christian faith and values carried her through thick and thin. We all benefitted from her daily chapelet'! Thank you mom!! Our family would like to sincerely thank all who have cared for her so well throughout her 96 young years' - especially the staff of le Manoir Saint-Pierre-Jolys, le Chalet Malouin, le Centre médico-social DeSalaberry and le Repos Jolys. Her celebration of life will start at 10:30 a.m. followed by the Mass of Resurrection at 11:00 a.m. on Saturday, May 18, 2013 at the Roman Catholic Church in Saint-Pierre-Jolys, celebrant l'Abbé Antoine Vo Van Hoa. In lieu of flowers, donations may be made in her memory to La Fondation du Centre médico-social DeSalaberry. Vita Funeral Home In Care of Arrangements, 204-425-3114