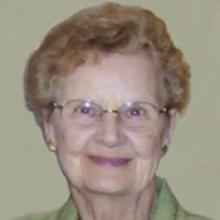 JUSTINA (JESSIE) KRIEGER (nee BRAUN) 1926 - 2013 On Wednesday, May 15, 2013 at Boundary Trails Health Centre, Jessie Krieger aged 86 years of Morden, MB went to her eternal rest. She leaves to mourn her passing four daughters, two sons and 14 grandchildren: Janice Krieger and Bruce Anthony of Denton, TX (Chris, Holly, Alicia); Gwen Krieger and Phil Disera of Toronto, ON (Selina, Luca); Marianne Krieger and Richard Mikucki of Winnipeg (Jessie/Lee, Stephan, Hayley); Gail Krieger and Nigel Newton of Toronto, ON (Rory, Juliet); Lester Krieger and Diana Buhr of Morden (Michael, Matthew, Jeffrey, Angela); David Krieger of Seoul, South Korea as well as two great-grandsons, Nicholas and Bentley. She was predeceased by her husband, John H. Krieger on May 19, 1999. Viewing will be from 1:00 p.m. until 8:00 p.m. on Saturday at Wiebe Funeral Chapel, 1050 Thornhill St. Funeral service for family and close friends will be held at 2:30 p.m. on Sunday, May 19, 2013 at Wiebe Funeral Chapel in Morden. Interment to follow at Chapel Cemetery. If friends so desire, donations may be made in Jessie's memory to the Boundary Trails Health Centre Foundation, Box 2000, Winkler, MB R6W 1H8. Wiebe Funeral Chapel, Morden In care of arrangements 204-822-4755 wiebefuneralhomes.com