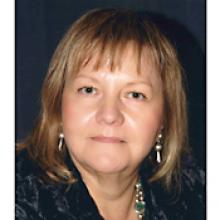 LINDA MARIE GIESBRECHT 1952 - 2013 With broken hearts her family announces Linda's death on Friday, May 17, 2013 at Health Sciences Centre, Winnipeg. Linda was diagnosed with a rare, very aggressive form of lymphoma in late April after being hospitalized on April 24. She waged a very brave battle; however her condition deteriorated rapidly as the disease progressed. Linda will be dearly missed by her mother, Evelyn; five sisters, two brothers, and their families: Irene (Clive Derham), Winnipeg; Ken (Mary), Plum Coulee; Jean, Winnipeg; Wendy, Winnipeg; Sandra (Ted) Penner, Bucerias, Mexico; Marv (Holly), Altona; Pam (Maury) Peters, Schanzenfeld. She is also survived by 16 nieces and nephews: Donaven (Mary), Mike, Kris (Danielle) and Keith Giesbrecht; Stacy (Rick) Schroeder; Lisa (Matt) Krahn; Harold (Alex) Rezansoff; Jessica and Max Penner; Scott Yingling; Emily, Gracie, Shelby Giesbrecht; Taylor, Zoe, Hailey Peters; and seven great-nieces and nephews: Kyle, Delaney, Loralei Giesbrecht; Ethan, Layla Schroeder; Kyah, Kezzia Rezansoff. She is also survived by extended family and many friends. Linda was predeceased by her Dad, Peter P. Giesbrecht on August 17, 2007. Linda was born in Altona and enjoyed life on the farm in the Plum Coulee area until she graduated from high school at W.C. Miller, Altona. Linda was baptized upon the confession of her faith in 1978. This faith sustained her throughout her life and especially in her battle with lymphoma. Linda graduated from University of Manitoba Law School in May, 1976. She articled for Manitoba Justice Prosecutions division in Dauphin before her call to the bar in June, 1977. She began her career as a Crown Attorney in Winnipeg and then in Dauphin until 1981. Following 15 months of travel overseas, Linda returned to prosecutions in Portage la Prairie in 1982. Linda was appointed as a Provincial Court Judge in March, 1988 and was on the bench until her retirement in summer 2010. During her time on the bench, she was active in many committees including the executive of the Provincial Judges Association of Manitoba for 13 years. She was the first female President of that organization from 2000 to 2002. Linda loved spending time with family and always made it a priority. She was the family's resident photographer, our chief organizer and party planner, song leader and guitarist, to name but a few of her many talents. "Auntie Lin" could be counted on for the most interesting stories, the neatest crafts, and she loved outfitting her nieces in the most beautiful dresses. She enjoyed travelling and managed to visit many of her "bucket list" destinations. She was the most relaxed at the family cottage at Pelican Lake. She enjoyed reading and loved a good joke. No matter what life handed her, she always managed to see the glass as half full. We knew Linda was a friend to many; however we had not realized how deeply she had touched and inspired so many until we witnessed it firsthand these last few weeks. Linda was our rock, and our inspiration. She will be very deeply missed but leaves us with warm and rich memories to cherish. Linda's funeral service will be held on Friday, May 24, 2013 at 2:00 p.m. at the Winkler Sommerfeld Mennonite Church, 189-2nd Street. Interment will follow at the Rudnerwiede Cemetery. The family has been very touched by the many prayers and the outpouring of affection and support offered during this very difficult time. We also want to thank the GA4 staff who were very involved with Linda's care at Health Sciences Centre, as well as: Dr. J. Donaleshen, Dr. K. Lamba, Dr. J. Johnston, Dr. D. Heuston, Dr. B. Penner, Chemo nurse Kathy Ramoser, Palliative Care Nurses Caitlin, Austine, and Suzette. In lieu of flowers, donations may be made in Linda's memory to CancerCare Manitoba, donate@cancercare.mb.ca or to Variety the Children's Charity, admin@varietymanitoba.com "Father, I have glorified thee on the earth: I have finished the work which thou gavest me to do." John 17:4 Wiebe Funeral Home, Winkler In care of arrangements, 204-325-4201 wiebefuneralhomes.com