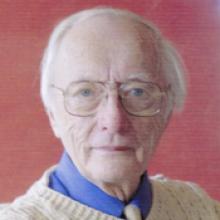 DAVID RENNIE SWAN July 23, 1925 - December 3, 2012 David passed away peacefully in his sleep just as he'd wished. In his own words he wrote: "I was born at 891 Grosvenor Avenue, the third child of Robert Rennie Swan and Ethel Sinclair Strang. I was predeceased by my two brothers, Robert Stephen Swan in 1971 and John (Jack) Andrew Campbell Swan in 1991 and my sister-in-law Nan Swan in 2007. (His sister-in-law Diane Swan died in January 2013). I am survived by my nieces Susan (Bill) Finlay, Judith (Bob) Baker, Andrea (Brent) Swan, my nephews John (Rita) Swan and Andrew (Andrea) Swan of Victoria and by their children and grandchildren as well as cousins and friends. I attended the area schools. After the war I joined the Canadian Bank of Commerce until 1950 when Eaton's employed me. In 1965 I enrolled in the first Social Welfare Workers course at Brandon Vocational Centre. I was then employed by the Society for Manitobans with Disabilities in the Children's Program in northern Manitoba, retiring in 1987. This gave me a very rewarding life. I became an openly gay man in the early eighties and was involved with several gay organizations. In 1984 I met and loved Michael McDermott and we lived happily together until his death June 19, 2001." David spent many hours volunteering for a variety of organizations over the years. Many have said to us how they have such fond memories of him. His dependability, kindnesses and care for others will be greatly missed. So will his sense of humour and great laugh. David's family wishes to give a special thank you to all of the staff of the Convalescent Home of Winnipeg for the dignity and caring extended to him over the past two and one half years. You helped make life safer, healthier and more pleasant for him. Bless all of you. Cremation has taken place and David will be buried with Michael in the family plot at St. John's Cathedral Cemetery. A service of celebration will be held at Westminster United Church on Saturday, June 8 at 11:00 a.m. At David's request, rather than flowers, please consider a gift to Augustine United Church's Oak Table, 444 River Ave., Winnipeg, MB R3L 0C7 or the Main Street Project, 72 Martha St., Winnipeg, MB R3B 1A4 or a charity of choice.