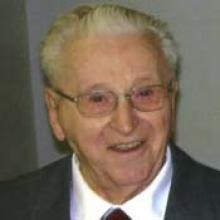 JOHN TOEWS 1926 - 2013 On Saturday, June 1, 2013 at Boundary Trails Health Centre, John Toews aged 87 years of Winkler, MB went to his eternal rest. He leaves to mourn his passing his wife, Annie (nee Dyck), one daughter, Florence Girlando of Chestermere, AB, three sons, Ken and Cathy Toews of Winnipeg, Wayne and Rita Toews of Winnipeg, Harold Toews of Chestermere, AB, five grandchildren and nine great-grandchildren. Viewing will be from 1:00 p.m. until 6:00 p.m. on Friday, June 7 at Wiebe Funeral Home, 121 8th St. in Winkler and at the church prior to the service. Funeral service will be held at 11:00 a.m. on Saturday, June 8, 2013 at Morden Sommerfeld Mennonite Church, 5 Parkwood St. in Morden with interment to follow at the Rosenbach Cemetery. If friends so desire, donations may be made in John's memory to Boundary Trails Health Centre, Palliative Care Unit, Box 2000, Winkler, MB R6W 1H8. Wiebe Funeral Home, Winkler In care of arrangements, 204-325-4201 wiebefuneralhomes.com