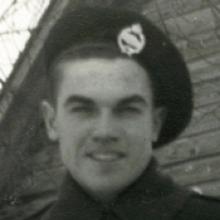 FRANK JOSEPH BOJARSKI December 3, 1918 - June 5, 2013 Frank Bojarski of Ste. Anne, MB passed away peacefully surrounded by his loving family. He was preceded in death by his parents, Antonina (nee Klepazek) and John Bojarski, his sisters, Bernice, Helen, Anne, and Valerie, and his two brothers, John and Charles. He is survived by his wife of 67 years, Margaret; three children, Raymond (Sue), Beverly (Edward) Wilson, and Wayne (Sherry); his five grandchildren, Liam (Marcie), Meaghan, Korey, Brittany, and Tasha, and two great-grandchildren, Olivia, and Colton. Frank was born in Brandon, MB and resided there for most of his life. Fourteen years ago Frank and Margaret moved to Winnipeg and then to Ste. Anne, MB in the spring of 2012. During the Second World War, Frank joined the navy and served on the HMCS Restigouche, a Canadian naval destroyer. After the war he returned to Brandon, married Margaret (Bulbuck) and began his life's work, caring for others as a psychiatric nurse at the Brandon Mental Health Centre. Frank had a zest for life, matched by his quick wit. Our family was often mesmerized by the tales he told of his youth. During the Depression, money was scarce. He and his buddies often rescued "lost dogs" and returned them to their rightful owners only when a reward was offered. Their entrepreneurship came to an end when they returned the dog the second time to the same owner. Mass of the Christian Burial will be celebrated Tuesday, June 11, 2013 at 10:00 a.m. from the Roman Catholic Parish of St. Timothy, 135 John Forsythe Road, Winnipeg with Fr. Phil Daley officiating. Interment will follow at Chapel Lawn Memorial Gardens. Matthew 11:28 "Come to me, all who labor and are heavy laden, and I will give you rest." Remembrances and condolences may be emailed to: bbfs@mymts.net or www.mosaicfunerals.ca Braendle-Bruce Funeral Service of Russell, MB together with Mosaic Funeral Services, Winnipeg in care of arrangements. For more information, call 204-773-2747 or 204-275-5555.