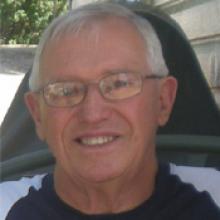 MURRAY CAMERON DILLABOUGH Murray Cameron Dillabough was born August 8, 1941. Murray was the youngest of six sons born to James and Verna Dillabough (nee Smith). The family grew up on a farm just west of Dand. Growing up, Murray became part of many boyhood adventures' - from having pitchfork fights with his brother Wayne in the barn, to hiding behind the door to whack his brother John on the head with the new phone book. Boys being boys, they also took their turn at making their mother prematurely gray; one time shooting her behind with a BB gun while she was bent over taking bread out of the oven. Funny thing is, while each of the brothers can recount the story, not one of them ever admits to being the boy who took the shot. Murray went to school in Dand and Deloraine. As he grew up, it became apparent to all that farming would be his path. In 1963, he purchased the Dillabough farm. In the 40 plus years that followed, Murray worked hard and expanded his own family farming operation. While his real knack (and fondness) was for planting and harvesting crops, farming for Murray and his family also involved beef cattle, a several year stint running a dairy, and occasionally raising hogs and chickens. Working the land though, was always his greatest passion and source of pride. When Murray moved into a house in town' (Deloraine) it did not immediately spell retirement, it just meant there was now a bit of a commute. During his years in town, Murray happily took the opportunity to become involved with rural conservation. He served as a member of the Turtle Mountain Conservation District for several years. Just as he was passionate about farming the land, he was just as passionate about conserving it. As he slowly transitioned into true retirement, Murray continued to work the land, just on a smaller scale. His yard was meticulously tended, and his garden always produced far more veggies than he could use. Participating in the local Farmer's Market, and just plain sharing his harvest with neighbours and friends provided him with a lot of joy. During his last few years, Murray was also able to do more travelling....something that was not always so easy for a farmer committed to crops and livestock. He enjoyed travelling to see his brothers and their families who reside throughout Canada. He travelled to Ontario to see his cousins, with whom he had always kept in touch, but was now free to visit in their part of the world. Murray especially liked travelling to Texas where he and Marj would spend the winter months. True to form, Murray became a well known member in the community of snowbirds in Weslaco. It was often said that Murray would talk to a dog with a hat on. Although no one ever actually witnessed him doing that, he was never one to shy away from meeting someone new. While enjoying the warm winter weather, Murray continued his puttering, which he always did so well; doing repairs, building add-ons and furniture for the trailer and, of course, keeping a garden. Murray also loved the beach in his later years, something quite different for a lifelong farmer from the Canadian Prairies. He especially liked taking drives out to South Padre Island in Texas. He even spent this past New Year's on the beach....again, something quite different for a prairie farm boy. Murray and Marj planned on moving to a cottage in Grand Marais when they returned from Texas this spring. Although it needed some work, Murray bragged that he was soon going to have the best landscaped yard in the area. He undoubtedly would have. Murray died on February 5, 2013 in Weslaco, Texas. In accordance to his wishes, his body was cremated, and will be interred in Lauder Cemetery with his parents. Murray is survived by his children Michael and Debbie; daughter-in-law Teresa; grandsons Brett, Dakota and Mitchell; brothers Rod, Robert (Joyce), John (Louise), and Wayne (Irene); sister-in-law Florence (Jim); and his partner Marj Adams. Murray was predeceased by his parents James and Verna Dillabough; his brother Jim, and sisters-in-law Lorraine and Dorothy. Funeral services are being held June 11 at 2:00 p.m. in St. Andrew's Anglican Church in Deloraine. Reception to follow at the Mountview Centre. Donations in memory of Murray may be made to the Turtle Mountain Conservation District, or to a charity of own choice. Messages of condolence may be made online at: www.wheatlandfs.com. Smith Funeral Home (204) 747-2088 - www.wheatlandfs.com