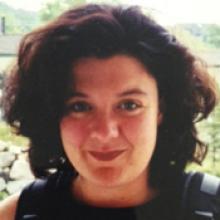 ANGELA LOUISE EVANS Angela Louise Evans, 46, passed away on June 5, 2013 at her home in Winnipeg. She was born on July 17, 1966 in Rugby, England to Russell and Vira (Griffiths) Evans. Angela grew up in The Pas, Manitoba. She graduated from Margaret Barbour Collegiate Institute in 1984. Angela then attended Law School at University of Ottawa and graduated with honours in 1994. Angela enjoyed a satisfying career as a lawyer, holding prominent positions with the City of Winnipeg, Justice Canada and Great West Life. Angela was physically active enjoying yoga, hiking and completed the Manitoba Marathon in 2001. We all enjoyed Angela's sense of humour and she would often have some great stories for us. Angela loved travelling, cooking and spending time with her family. Volunteering was an important part of Angela's life and she was passionate in her duties as a board member for Habitat for Humanity. Angela was preceded in death by her mother Vira Evans; her grandparents Iris and Islwyn Evans, and grandparents Beatrice and Idwall Griffiths. Angela is survived by her daughter Anna Evans-Boudreau of Winnipeg; her father, Dr. Russell Evans of Clearwater Lake, Manitoba; her sister Alison (Michael) O'Rourke; her nieces Shauna (Chad) Munro, Brianne O'Rourke (Jesse Ramstead), Gillian O'Rourke (Peyton McAree), and nephew Brodie O'Rourke all of The Pas, Manitoba. A memorial service will be held at St. Luke's Anglican Church, 130 Nassau St. N., Winnipeg, at 2:00 p.m. on Friday, June 14, 2013. A private burial will be held at a later date in The Pas, Manitoba. In lieu of flowers, the family requests memorial donations be made to Habitat for Humanity - Women Build, phone 204-233-5160, ext 266 or www.habitat.mb.ca/donate-legacy.cfm Hemauer Funeral Home and Cremation Services, The Pas, in care of arrangements For online condolences, visit www.hemauerfuneralhome.com