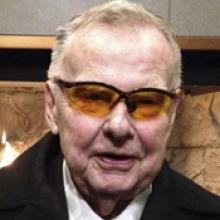 JOSE PONEIRA Jose Poneira, 90, of Winnipeg, MB passed away peacefully on Saturday, June 22, 2013. Jose is survived by his loving wife of 58 years, Gladys, son Rick (Colleen), daughter Melody (Mark) Clegg, two grandchildren, Wesley and Norah, three step-granddaughters, Jennifer, Cynthia and Samantha, and two great-grandsons, Jack and Colin, as well as his dear nephew, Georges (Elizabeth) Tremel of Jasper. Jose was preceded in death by his parents, Alexander and Frieda, and his sister Martha. Jose was born on February 8, 1923 in Lubeck, Germany. After enjoying a privileged childhood and studying music in Zurich, Switzerland he was forced to flee their home in Europe, abandoning their possessions. The young Jose fled through Europe, emerging eventually in Argentina after spending six months in Cuba. It was during these formative years where Jose developed his love of Latin Music which he would later influence his music style. In 1947 Jose moved to New York where he played in all the popular nightclubs of the time. Jose eventually made Canada his home moving and supporting his family along the way. Jose, the accomplished pianist, composer and marvelous entertainer also made his mark appearing on Canadian TV and radio with his own band performing an eclectic blend of classical and South American music. Jose's life was incredible, mixing with stars of the silver screen, even playing at the engagement party of Grace Kelly and Prince Rainier of Monaco. In his final years, Jose became a local icon playing in the Palm Room at the famous Fort Garry Hotel, Winnipeg. Jose played there for the better part of the last 20 years of his life entertaining a generation of Winnipeg residents. Despite failing health and near blindness Jose made his final appearance shortly before his passing. A true gentleman, Jose will be dearly missed by family and those privileged to call him friend. A special thank you to the Riverview Hospital staff of 3 East in Winnipeg for their loving care, compassion and support. A celebration of his life will be held on Thursday, June 27, 2013 starting at 7:00 p.m. at Chapel Lawn Funeral Home in Winnipeg, MB. In lieu of flowers, donations can be made to the Canadian National Institute for the Blind, 1080 Portage Avenue, Winnipeg, MB R3G 3M3. "Gone yet not forgotten, although we are apart, your spirit lives within us, forever in our hearts." For those who wish to sign the online Guest Book please visit our website. Chapel Lawn www.chapellawn.ca 885-9715