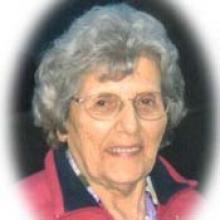 MARIA (MARY) BOYCHUK (nee PERSOWICH) It is with great sadness that we announce the passing of our dear mother, grandmother and great-grandmother, Mary Boychuk, wife of the late Matt Boychuk, formally of Sundown, MB. She passed away suddenly, Monday, June 24, 2013 in her residence at Shady Oaks Lodge in Vita, MB. Mary was born to Harry and Anna Persowich on May 23, 1920 in Sirko, MB. On September 15, 1940 Mary married Matt Boychuk, and together they farmed south of Sundown where they raised their family. In 1999, when they moved to Shady Oaks Lodge in Vita, MB, which became their home. Mary is survived by one son, George (Linda), one granddaughter Rhonda (Allen) Levenec and three great-grandchildren Danielle (Neil) Ivall, Derek (Ashlee) Levenec and Dannalee (Chris) Levenec. She also leaves to mourn sister-in-law Edna Boychuk and numerous nieces and nephews. She was predeceased by her parents, beloved husband Matt in 2001, son Dennis in 1987, her brothers Bill, Peter, John and only sister Sophie. Mom was a hard working homemaker. She was an amazing cook. Her petite perogies and cabbage rolls were full of flavour and love. We never left her house without a care package. Her greatest happiness and proudest achievements were her family. She cherished every card, visit and phone call. To have her family together was her greatest joy. She was forever thankful for the friendships extended throughout her life. As family would like to thank Sharon, Carol, Donna and the home care staff for all their help and support. Prayers will be on Thursday, June 27, 2013 at 7:30 p.m. at the Vita Funeral Home in Vita, MB. The Divine Liturgy will be on Friday, June 28, 2013 at 10:30 a.m. at the Ascension of Our Lord Ukrainian Catholic Church in Sundown, MB. In lieu of flowers, donations may be made to the Ascension of Our Lord Ukrainian Catholic Church Cemetery. Vichnaya Pamyat Memory Eternal Vita Funeral Home Vita, MB in care of arrangements 1-204-425-3114