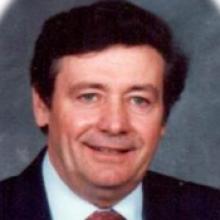 FRANK PRAYMAYER December 2, 1934 - June 24, 2013 Frank Praymayer, 78, of Sprague, Manitoba passed at Bethesda Hospital with his family at his side. Left to cherish his memory are his wife and life partner Donna, their son Duane Praymayer (Patricia), daughter Joyce Laroche (Ron), and grandchildren Karissa and Tyrel. Frank was born at home north of Sprague and attended the Hardy school. He was sixth of seven siblings born to Joeseph and Erzsebet Praymayer who immigrated to Canada from Szekszard, Hungary during the mid 1920s. Frank mixed farmed while raising his family and working for the Sprague wood mill until it was destroyed by fire, then as a Fire Ranger for the Manitoba Department of Natural Resources until his retirement in 1997. This love of nature and the outdoors resided with him through retirement as he spent much of his time feeding and looking after the deer, partridge and songbirds which resided on his small farm. He loved his family and was especially very proud of his grandchildren. He will be greatly missed by family and friends. The family would like to extend heartfelt thanks to the nurses and staff of the Bethesda Hospital of Steinbach and the Southern R.H.A. Palliative Care staff for their care of Frank and support for his family. Funeral Service will be held Wednesday, July 3, 2013 at 2:00 p.m. in the Notre Dame de l'Assomption Catholic Church, South Junction, Manitoba with interment in the Sprague Community Cemetery, Sprague, Manitoba. If friends or family so desire, donations may be made to the Canadian Cancer Society, 193 Sherbrook Street, Winnipeg, MB R3C 2B7 or Locally in Sprague to E.B.C.H. Inc. ARRANGMENTS BY VITA FUNERAL HOME 256 RAILWAY AVENUE VITA, MANITOBA Phone 1-204-425-3114