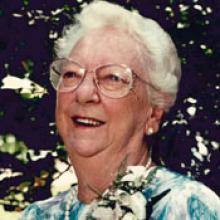 OLIVE (IRENE) DENOON (nee COAD) On Wednesday, June 19, 2013 at the age of 97, Olive "Irene" Denoon (nee Coad) passed away peacefully at the Valleyview Care Centre, Brandon. Irene was the youngest child of Dick and Margaret Coad and was born May 23, 1916 and raised in Eden, Manitoba. The Coad family were among the first cabin owners (Sunset View) at Clear Lake and their summers were enjoyed there with family, friends and boarding guests. Irene married her childhood sweetheart and soulmate Vernon Denoon on July 14, 1940 at Clear Lake. They had an amazing love and life together. They built their home in Onanole and raised three children there son Jim (June), daughters Joyce and Joanne (Ken). It was rare to ever see one without the other. After retirement they spent most summers camping and fishing around the province with family and friends. Vern and Irene were married for 69 years before Vern's passing in 2009. Irene loved children and was blessed with grandchildren Beverly Ruml, Mark (Pam) Ruml, Vern Ruml and Cherie Bailey; great- grandchildren Jordan and Nikki Bailey, Dustin and Mitch Ruml, Nina and Santee Ruml and great-great-granddaughter Eris Ruml. Family and friends meant everything to Irene and she was always there to lend a shoulder, wipe a tear, bake a pie or share a good laugh. She would always make sure all of our favourites were coming out of the oven upon our arrival. No one ever left Irene's kitchen hungry or without having played a game or two of cards! She was a great woman who will be deeply missed. Irene was active in the community; she was a CGIT and Brownie leader, Sunday School teacher and volunteer. She worked many years at the Onanole Post Office, she was Past President and Honorary Member of the Women's Institute (WI) and United Church Women (UCW) and member of the Onanole Seniors Group. Vern and Irene moved to Brandon in 2003 prior to moving into the Valleyview Care Home. Our family wishes to thank Dr. Egan and the staff at Valleyview for the wonderful and compassionate care. Irene was predeceased by her beloved husband Vernon; parents Dick and Margaret Coad; sisters Margaret (Doug), Verna (Bill) and brother Earl (Olive); son-in-law Frank Ruml and great-grandson baby Frank Ruml. Irene and Vern will be laid to rest together at the Onanole Cemetery in a private family service at a later date. Donations in memory of Irene would be welcomed by the Canadian Cancer Society, 415 - 1st Street, Brandon, MB R7A 2W8, or the Alzheimer Society of Manitoba, Unit 4B - 457 9th Street, Brandon, MB R7A 1K2. "Just one more cast Vern!" Expressions of sympathy may be made at www.memorieschapel.com. Arrangements with Memories Chapel & Pre-Planning Centre, Brandon 1-888-694-8153.