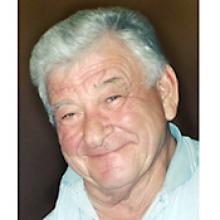 HARRY WASYLYK Harry Wasylyk was born on December 5, 1927 and passed away peacefully on July 1, 2013 at age 85. He was predeceased by his parents Harry Sr. and Irma Wasylyk, beloved wife Evangeline (Toots), and his sister Pauline. He will be missed by his sons Glenn (Kathy), Scott (Jackie), Russ (Kim), and by his grandchildren Mike (Kristie), Amanda (Joshua), Tabitha (Steve), Danny, great-grandchildren, his sister Lenore, brother Denis Wasylyk and many nieces and nephews. Harry was born in Milwaukee, WI. Harry Sr. and Irma moved back to Narol, MB when Harry was an infant. He was raised and educated in Narol. Harry later was drafted and served in the American Army during the Korean War. Upon his return he met the love of his life and married Evangeline (Toots). Harry along with Harry Sr., Mickey Hayashi, and Walter Wasylyk founded the Polyethylene Bag Manufacturing Ltd. introducing many innovative plastic packaging products which includes the famous "green garbage bag". Their other business venture was to own the Niakwa Hotel. Later Harry's career took him to Grainmaster Mfg. where he was the President and General Manager for 30 years. Harry had many interests including being a Shriner. In his retirement he settled in Peachland, BC where he enjoyed golfing with all his friends. Dad's love of fishing lead him and his companion Lydia Erickson on many fishing expeditions to the British Columbia coastline, The Florida Keys, and the Hawaiian Islands. (Dad still holds the family record for the biggest Salmon caught...55 pounds!!!). But Dad's favourite trip was the annual Grainmaster fishing trip held up at Sasaginnigak Lodge in Manitoba. Tribute from the Sas trip: Gentlemen, unfortunately the time has come when we all must pay tribute to a fellow fisherman. Harry was born on December 5, 1927 and passed July 1, 2013. He would have liked nothing more than to be here with all of you, sharing companionship, stories and the chase of the big one. His deep drive and determination, (perhaps inherited) extended to the fishing grounds, as like all his ventures in his life. Looking back to his army days a friend and fellow soldier, whom called out of the blue just to check on him during one of his surgeries, and was unaware he was in British Columbia told me many stories of their time together in the U.S. army. After listening to all the tales, he concluded by saying "there is no other guy you would want to be in a foxhole with. He saved my life!" Yes fishing played a major role in decision making along the road, one being if we cannot make enough money in the business to go fishing, what's the point. I looked through a collection of family photos and needless to say, many are of fishing trips. I can honestly say there are 150 to 200 different folks my dad fished with. He truly loved the sport. As you can notice the chair at the head of the table, it is empty. A great, great, father, boss, grandpa, husband, businessman, friend, and fisherman has left the building. God bless him and you. Here are a few quotes from Harry that have been heard on the water/cabin up at Sas. - Take a friend fishing. He or she will be a friend for life. - It's not the biggest until you weigh it. - You kept that? - Is that all you guys have caught? - Got any Ice? - Got any mix? - Got any booze? - How can that guy fish like that? - Where's your partner? - Take extra, you never know. - Excuse me warden, I have been fishing here since before you were in diapers. - #@&* forgot to pack my underwear, you got any extra? - It's ok, we all smell the same - I thought I snored loud. WOW! - Any broads here that need a drink? - Who filleted this? - Crib anyone? You got two bucks. - Since you're up, why don't you make me one too. Harry will be missed by many for his warm personality, loving and generous nature. He will be remembered for his ability to tell a great story and his quick wit. As per Dad's request, a private family graveside service will be held at a later date. In lieu of flowers, friends so wishing may make a donation in memory to a charity of your choice. To a foxhole guy, thanks for everything. We'll miss you Dad.
Publish Date: Jul 13, 2013

HARRY WASYLYK On Monday, July 1, 2013, Harry Wasylyk passed away at the Royal Columbian Hospital, Vancouver, BC, at the age of 85 years. Longer obituary to follow in Saturday's Free Press.
Publish Date: Jul 9, 2013