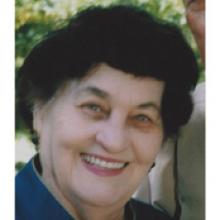 AUGUSTA (GUSTIE) VICTORIA STRUSS (nee KURBIS) After a lengthy illness, Gustie passed away on Friday, July 5, 2013 at East Gate Lodge Personal Care Home in Beausejour, MB at the age of 93 years. Gustie will be sadly missed by her three children, son Rod Struss (Lisa) of Ladywood; two daughters Barbara Hunt (Calvin) of Newfoundland and Ruth Bain (Graham) of Winnipeg; eight grandchildren Karli and Corey Struss, Ron and Roxanne Sugden, Cali Joi Hunt, Laurie Boudreau (Pierre), Tim and Leslie Hastman; two great-grandchildren, Katrina and Erik Boudreau; brother-in-law, Roy Pokrant of Rosenfeld, MB; as well as numerous nieces and nephews. She was predeceased by her husband, Edward Struss on August 25, 2008; parents Albert and Paulina Kurbis; five brothers, August (Edith), Paul (Lena), Henry (Emeline), Fred (Emma) and Wilfred (Rose ); and four sisters, Annie Trapp (William), Hertha King (Joe), Lizzie Biedler (Roy), and Elsie Pokrant. On November 24, 1919, Augusta was born in Greenwald, MB. She married Edward Struss of Ladywood. They farmed the family farm until they moved to Beausejour, MB. Mom worked with Home Care where she was very valuable as an interpreter, as she spoke and understood, German, Ukrainian and Polish. She was an avid reader and had a great passion for playing bingo. She was a wonderful cook and made both German and Ukrainian dishes. Mom was a feisty person who loved to tell jokes, especially off-color ones. She will be sadly missed by her family and bingo friends. On Thursday, July 11, 2013, Gustie's Funeral Service will be held at 2:00 p.m. in the Zion Lutheran Church, 403 1st Street N., Beausejour, MB, with Pastor Stan Richards, presider. Flowers are gratefully declined. Wojcik's Funeral Chapel & Crematorium, serving Beausejour, wojciksfuneralchapel.com 204 - 268 - 2263.