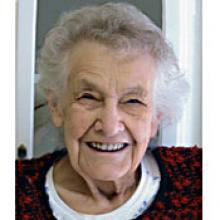 MARY DYCK (nee FRIESEN) 1919 2013 Mary Dyck passed away at Salem Home in Winkler, MB on Saturday, July 6, 2013 at the age of 94 years, after a long and healthy life. Mary will be lovingly remembered and deeply missed by her eight children and their families: Larry and Gloria (Ottawa), Jake and Vicky (Winnipeg), John and Henrietta (Calgary), Johanna and Don Martin (Brussels, Belgium), Peter (Winnipeg), Bill and Linda (Vancouver), George and Crystal (Vancouver) and Grace and Gerry Neustaedter (Calgary); 21 grandchildren and 12 great-grandchildren. Mary was predeceased by her husband, Jacob Dyck in 2004, her grandson, Lyle Dyck in 2007 and her brother, Isaac Friesen in 1999. Mary was born on May 29, 1919 in a farmhouse in the area south of Morden, MB. After the early passing of her parents, she lived with her grandparents in Reinland, MB. Following her marriage to Jacob Dyck in 1940, they lived in Blumenfeld, Reinland, Edrens, Winnipeg and in Winkler since 1984. Funeral service will be held at the Winkler EMM Church, 600 Southview Drive, on Wednesday, July 10, at 2:00 p.m. Interment will follow at the Blumenfeld Cemetery. In lieu of flowers, donations may be made to the Salem Foundation Inc., 165-15th St., Winkler, MB, R6W 1T8. The family would like to express sincere thanks to the staff at the Salem Home for the tender and loving care they provided for her during the nine years she lived there, particularly in the last months as she weakened and declined. Wiebe Funeral Home, Winkler in care of the arrangements, 204-325-4201 wiebefuneralhomes.com