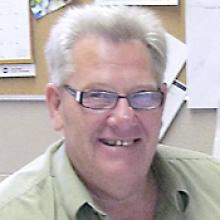 DENNIS GRIFFITH HIGGINSON April 16, 1952 July 6, 2013 It is with heavy hearts that the family announces the sudden but peaceful passing of Dennis on July 6, 2013. Dennis was predeceased by his father Ruscoe Eric Garth "Garry" and stepson Kenneth. He leaves to mourn his beloved wife Helen and his son Kealan; his stepchildren Sharon (Curtis), Maurice (Pam); foster daughter Sabrina (Andrew); his mother Dorothy (Dede); brothers Greg (Winnifred) and Warren (Wendy); sisters Laralie (Kim) and Shani (Dale); grandchildren Devlin and Cohan (Sharon) and Sadie (Maurice), foster grandson Shawn (Sabrina). He was a wonderful uncle to Tracy Kempthorne and Kelly Angus and Christopher and Zachary Daw. Dennis is also survived by numerous aunts, uncles and cousins, and many close friends. Dennis was born in Rivers and lived there until 1969 when the family moved to Killarney. Upon completion of high school, Dennis began work with the Town of Killarney, working his way up the ranks to the position of Town Administrator. In 1988 Dennis moved to Gladstone to take the position of Town Administrator. It was in 1989 that Den met his future wife Helen. They resided in Gladstone until 1997 at which time Dennis and Helen moved to Spiritwood, SK; again he assumed the role of Town Administrator. The opportunity to come back "home" to his beloved Rivers presented itself in 2001, where yet again Dennis was appointed to the familiar role of Town Administrator. Dennis worked for the Town from 2001 until his retirement late 2011. Dennis was well known for his sense of humor and ability to put things in real perspective. No matter where he went people knew Den and always recognized his distinctive voice even if they did not see him immediately. Beneath his sometimes tough exterior was a man of compassion who cared about people. During his years with Helen they worked together with persons with disabilities and opened their home to the benefit of many foster children. He will be greatly missed by his wife and son, his mother, brothers, sisters, other family members and many friends and acquaintances. A celebration of Dennis's life will be held on Tuesday, July 16, 2013 at 2:00 p.m. at the Rivers Community Centre Upper Hall, 101 Main St., Rivers, MB. In lieu of flowers, we would welcome donations in Dennis's memory to the Heart and Stroke Foundation of Manitoba, 824-18th St. Unit 3, Brandon, MB R7A 5B7. Messages of condolence and/or photos can be shared at www.campbellfuneralhome.ca. Campbell Funeral Home, Hamiota are entrusted with the arrangements. (866) 620-2744