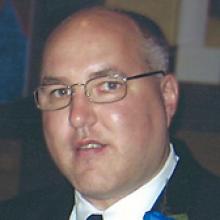 DAVID (FREDERICK) LANGNER It is with deep sadness that we announce the passing of (Our King) David Langner on July 9, 2013, at the age of 45, after a long and brave battle with cancer. David leaves his stepson Avery Langner and his precious little princess Emily Ann, his sister Karen (Keith), Nancy (Tom), Janet (Glen), Bradley (Donna), and Kim (Duane) along with many nieces and nephews to cherish his memory. David was the fifth of six children and he was loved and will be sorely missed by them all. David was predeceased by the love of his life Christie Langner (Navis) in 2012 and his parents: Fred in 2000 and Marina in 2007. David also leaves to mourn many close friends that he had cherished over the years, with a special mention to Mark L. and Darrin B., Steven B. and Kevin G., who were David's oldest and dearest friends who provided him with many hours of support and company. David was born in The Pas on August 15, 1967 and grew up and settled in Winnipeg. He was a deep thinker and learned to play chess at an early age and became a Chess Master, he also liked to dabble in the stock market, but it was David's role as a husband and father that he cherished and was devoted to more than anything else. David loved his career at Yetmans for 16 years. He will be missed by his co-workers. A special thank you goes out to the ward GD6 for their effort to treat his illness. A service celebrating David's life will be held on Tuesday, July 16, 2013 2:00 p.m. at Chapel Lawn Funeral Home, located at 4000 Portage Ave. In lieu of flowers, donations may be made in his memory to The Canadian Cancer Society or to a charity of one's choice. For those who wish to sign the online Guest Book please visit our website. Chapel Lawn www.chapellawn.ca 885-9715