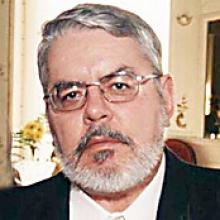 NICK ANDRUSIAK Nick was born October 17, 1941 in Vita, MB to George Andrusiak and Sophie Pohaichuk. He is survived by his loved companion, friend, and spouse of almost 50 years, Frances (nee Elaine Frances Toews), children John (Rebecca Young), Peter (Charlotte LaFleche), Maria (Isaac Morland) and Michael (Jacquie Neufeld). He was predeceased by his sister Anna. He leaves his precious friends Norm Leathers and John Bachmann. On July 9, 2013 Nick died peacefully, comfortably, and at home as he wished. He leaves his genealogical legacy and love to his grandchildren Roy, Katherine, and Sophia (children of John and Rebecca Andrusiak); Ilya, Nikolai, Katarina, and Elena (children of Isaac and Maria Andrusiak Morland); and Ashley, Hailey and Katelyn (children of Michael and Jacquie Andrusiak). He was also entertained by grandpuppies Bijou and Milou (Peter and Charlotte). Nick lived a life that extended from a one-room house on his grandparents' homestead to the latest computer and technological era which he fully embraced and which helped him manage his increasing immobility. Nick lived his early years with his parents on the homestead of his paternal grandparents Iwan and Maria Andrusiak, Bukovinian immigrant pioneers at Sirko, MB. Being an observant little boy he had many experiences and gathered information that as a storyteller he told frequently and created as a book, Living on the Homestead (available as a download at www.andrusiak.ca). At 16 Nick left home to continue high school at United College and study at the University of Manitoba. Life changed when he met Frances and they married October 19, 1963. They helped each other finish university degrees and Nick went on to be a teacher of science and chemistry at Norberry School and Dakota Collegiate. His was not a one-topic pool of knowledge; he knew something about everything and could pull amazing information with a quick, clear explanation out of his brain on an unending array of subjects. Nick was interested in geography and history, possibly as a result of reading dictionaries and encyclopedias from cover to cover before electricity came to his town. That began his quest for more knowledge and opportunities to take courses at Knox College, Galesburg, IL and Seattle University (MSc) during the summers 1971 to 1974. He never let school interfere with his education and each trip had a packed agenda to state capitals, historic places, trains and mountains, or other geographical points of interest. He loved taking his children stargazing. Maria will look for him in the constellation Orion which always brought her home. Nick as a teacher was known as being larger than life in physique, knowledge and attitude. Students remembered him and he remembered so many of them. He was known for the occasional overly loud reaction to students' behavior but he explained that he had to "get their attention first." But he was a gentle person, compassionate and a students' advocate. He wrote one of the first articles about bullying in schools, to which the reaction was a meeting of a committee of principals who insisted he retract his article because it didn't exist in their schools. As the consummate editor he refused, suggesting they write an article giving their point of view. They never did. Nick liked trains and thought he wanted to model trains. When he joined the Winnipeg Model Railroad Club and discovered that modeling trains also involved organizations, printed materials and newsletters, and politics, he never quite got around to much modeling. Newsletters, brochures, magazines - they were in constant flow in the house. Children were taught to collate newsletters as soon as they could reach the height of the kitchen table. Gestetners, printers, printing presses, every variety of office equipment was all in operation. One of the highlights of his life was being on the executive team organizing the National Model Railroad convention in Winnipeg in 1983, a meet that set many benchmarks including the timetable booklet format. Nick had to leave his teaching career at age 51 when he developed paralysis related to spinal stenosis. Later he developed Parkinsons. But he demonstrated to us that life can be full. He volunteered with CNLines as managing editor for their magazine and book publications. He, Stafford Swain, and Al Lill spearheaded many organizations and projects. He also enjoyed doing petit point and cross-stitch especially on train and pioneering themes. And he told stories, a new one to each new person that came in the door. Nick appreciated the caregivers, health professionals and systems who enabled him to live all phases of that full life. Charlotte, his special angel, enabled the final key supports that made his death at home possible. Nick will be dearly missed and remembered by many. He was truly a giant of a human being. There has been immediate burial, no funeral. At a future date there will be a gathering of family and friends. For an invitation, please call or email: nickscelebration@gmail.com NEIL BARDAL FUNERAL CENTRE 204-949-2200 neilbardalinc.com